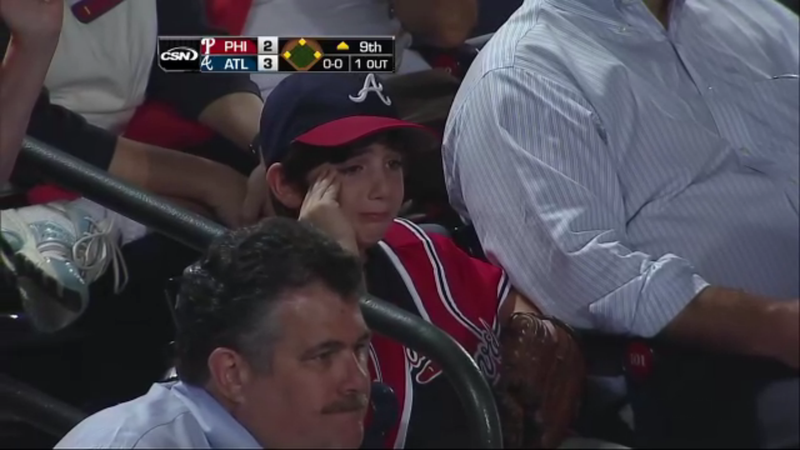 The Phillies' franchise-record 102nd win of the season, ended the Atlanta Braves push for a playoff spot.

Even in Game #162, baseball wouldn't go down without a fight. So, as the innings carried on, the excitement level just continued to pick up. This was as close to a Postseason preview as you could get. In the end, the Braves' playoff hopes rested on two outs. They couldn't get them. That allowed the Phillies to get one last chance at the franchise record. Let's just say this time, it is all in the Cards.

The Phillies were on the board right away, as Ryan Howard delivered an RBI double in the first to give the Phils the early lead.

The Braves tied it right up off Joe Blanton, as Chipper Jones lifted a sac fly to left to tie things up.

The Phillies used Joe Blanton for just two innings, and he allowed the one run. After that, they turned to Cole Hamels for three innings. He made one mistake, an 0-2 fastball to Dan Uggla which was belted out to left, giving the Braves the lead.

The Phillies slowly but surely made things interesting. A sure-fire double play ball took a hop off Jack Wilson in the seventh off the bat of Carlos Ruiz. That error allowed Raul Ibanez to score.

In the eighth, the Phillies managed to load the bases in the eighth off Jonny Venters, but Ibanez struck out to strand them loaded.

In the ninth, the Phillies were able to force another rally, loading the bases with one out for Chase Utley off Craig Kimbrel. Kimbrel allowed a sac fly to Utley, tying the game.

From there, both teams went back and forth for three extra innings, right through the 10th, 11th, and 12th. In the 13th, the Phillies managed a little magic. Brian Schneider worked a one-out walk. Chase Utley kept things going with a two-out single. Hunter Pence followed with a little "big" hit, putting a grounder into no-man's land, allowing Schneider to score.

David Herndon came on for the bottom of the 13th. The Phillies already had scoreless innings out of Vance Worley, Brad Lidge, Ryan Madson, Mike Stutes, a pair from Michael Schwimer, and one more from Justin De Fratus. Herndon was one of the only options left. He allowed a one-out walk to put the tying run on. The next batter was Freddie Freeman, and he grounded into the game-ending 3-6-3 double play to give the Phillies a new franchise record 102 wins, with a 4-3 triumph in 13 innings.

Already known was how the Cardinals fared. In Houston, St. Louis rolled to an 8-0 win, which means that on that double play, the Braves' season is over, and the Phillies open their playoff schedule with the Cardinals in the NLDS on Saturday.

This game was about as close to a Postseason game as you could get. Both teams played a hard-fought game, and it really came down to the end. This game left you feeling like both teams would be out with a loss. The Phillies had nothing to lose. They just didn't play like it. What wasn't there just four days ago appears to be back. The timely hits, the clutch pitching, it was all there. And now, it just has to carry over for 11 more wins.

The numbers from an individual standpoint don't even matter, because the individual numbers will count for so much more in the Postseason. But tonight was about one team, the 2011 Phillies, who will always be remembered as the greatest Phillies team in history for what they did in 162 games. What they do in the next 11 or so is going to be more important, and ultimately tell where they rank in franchise history, but on this night, just celebrate the greatest Phillies' season in nearly 130 years.

Two personal milestones were reached tonight as well. Charlie Manuel won his 646th game as Phillies manager, making him the all-time winningest manager in franchise history. Compare that to young Justin De Fratus, who will now cement a place in Phillies' history for being the winning pitcher of win #102. It just happened to be the first of his career.

Now, the Phillies have reached that next step, and with the excitement level at an all-time high, it should be a great ride. The Postseason begins in just three days. Phillies Network will have a whole lot more in that time, so stay tuned.