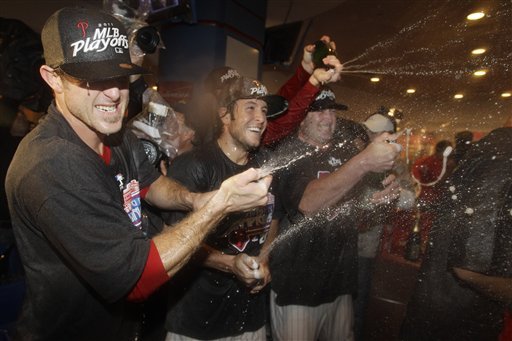 22 Hours later, the Cardinals are up 2-0 in the first inning after Albert Pujols drilled a home run to left field off of Cole Hamels.

Those two runs would be the only ones scored until the sixth inning, when Allen Craig also blasted a two-run shot, putting the Cards up 4-0.

As for the Phillies, they managed 0 runs on 8 hits throughout the game against the Cardinals. To reiterate, what does it matter? Let them enjoy their hangover while being surrounded by screaming fans.

Cole Hamels struck out nine and walked none while giving up four earned runs in seven innings pitched. As per usual, no run support. Joe Blanton came in for the eighth inning, allowing a solo home run to Allen Craig, making it 5-0.

Justin DeFratus, a recent call-up from Lehigh Valley, came in to making his major league debut in the 9th inning. After getting the first two batters to pop-out, Justin walked Rafael Furcal, but pitched a scoreless inning, his first in the bigs.

The Phillies couldn't come back in the bottom of the inning, being shut out 5-0. Oh well.