Then and Now: Glen Metropolit 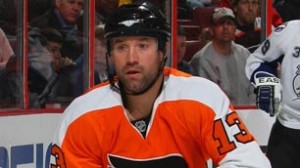 Glen Metropolit defines the word journeyman. Playing for 12 different teams since his days with the Grand Rapids Griffins of what used to be the International Hockey League back in the 1997-1998 season, Metropolit has spent time in four different leagues since becoming a professional hockey player.

Although he's played in over 400 NHL games, Metropolit has experienced the most success in National League A (NLA), Switzerland's top tier league. Earning several awards for his 2005-2006 season with the Champion HC Lugano, Metropolit has made a noticeable mark on the NLA. For the Flyers, however, his impact wasn't outstanding as he only spent 55 games with Philly before being waived. Let's look at Metropolit's time in Philadelphia and what he's accomplished since.
Metropolit's last goal as a Flyers (go to :50)
Thanks to NHLVideo

After finishing the 2007-2008 season with the Boston Bruins, Metropolit signed a two-year contract with the Flyers that July. Serving as a fourth liner, Metropolit had a respectable 14 points in 55 games for Philadelphia before being placed on waivers and picked up by the Montreal Canadiens on February 27th, 2009. Ironically, Metropolit's first game for the Canadiens was against the Flyers on the same day. The Canadiens ultimately won the game while Metropolit had a minus-1 rating and 2 PIM. Metropolit's 2009 and 2010 postseason totals were the same, but both came in completely different fashion. As the Canadiens proceeded to miraculously upset both the Washington Capitals and Pittsburgh Penguins in seven games before bowing out to the Philadelphia Flyers in a five game Eastern Conference Finals, Metropolit also partook in a pair of tallies. Metropolit had no points and was a minus-2 in his final NHL game, Game 5 of the Eastern Conference Finals in South Philadelphia.

Leaving the Canadiens after the 2010 playoffs, Metropolit returned to the NLA signing a two-year contract with EV Zug. Scoring 53 points, 15 of which were goals, Metropolit led the NLA in points for a second time in his career (2005 with 65). The NLA points leader in 2010? Randy Robitaille with 65. 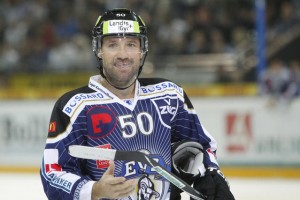 Entering the postseason for the fourth straight year, Metropolit did more than just assist this time around. Averaging more than a point per game, he registered two goals and ten points. This was the first time Metropolit had scored in the postseason since his game-winning goal for the Bruins in Game 5 of the 2008 Eastern Conference Quarterfinals.

Remaining with the team for the second year of his two-year contract, Metropolit is off to a strong start in the first four games of the 2011-2012 season. He has a goal and four assists in the opening four games.

With just one game-winning goal in a playoff series his team ultimately lost, Metropolit most likely won't be remembered for any plays he produced in the NHL. However, his work in the NLA is nothing to disprespect. Averaging 1.29 points/game during the regular season and 1.41 during the postseason, Metropolit can also claim the honors of NLA league leader in points (twice), NLA Best Forward, and NLA Champion in 2005 with Lugano. At the age of 37, a return to the NHL isn't likely. Despite this fact, Metropolit can be honored as a great player over in Switzerland.