Then and Now: Kyle Calder 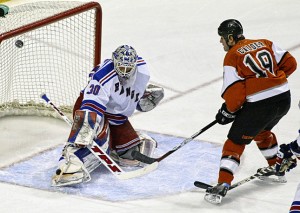 Michal Handzus has had six seasons of at least 30 points in his last eight NHL seasons. In his three years with the Flyers he totaled 146 points during the regular season along with 20 points in the playoffs.

Although these are impressive stats, in 2006 Flyers' GM Bob Clarke decided to make a trade with the Chicago Blackhawks. Coming off a 26-goal season and serving as an alternate captain with the Hawks, Kyle Calder made his way to Philly. The 27-year-old played less than 60 games for his second NHL team and had the misfortune of taking part in the Flyers' worst season in franchise history.

It's been over four years since Calder has been in the Orange and Black. Let's take a look at Calder's experience in multiple leagues since his time with Philadelphia.

Calder's tenure lasted all of 59 games during the 2006-07 season. He recorded nine goals and 12 assists. He managed to post a two-goal game in January against the Washington Capitals. Unfortunately, it didn't matter as the Caps destroyed the Flyers 6-2. Calder also managed to score four goals in a five-game span in late December-early January of that season. His last goal as a Flyer came on February 19 against the Boston Bruins, a game where he'd also have two assists and earn the second star as the Bruins won 6-3 (go to 1:58).
Thanks to NHL Video

One week after his three-point game against the Bruins, Calder found himself back in Chicago. Traded for defenseman Lasse Kukkonen and a third-round pick in the 2007 draft (with which the Flyers chose Garrett Klotz), Calder returned to the team that drafted him in 1997, but he didn't stay there long. Later that day, Calder was flipped to the Detroit Red Wings for Jason Williams.

Seemingly not phased by the trades, Calder made an instant impact for the Red Wings. In his first game for the Wings, Calder scored a goal against the Blackhawks on his first shift of the game and added an assist later on. He'd play 18 more games for the Wings to finish out the season posting four more goals and eight more assists.
Thanks to NHL Video

Finishing at the top of the Western Conference, the Wings eliminated the eighth-seeded Calgary Flames in six games. Calder posted his only point of the postseason in Game 6 as he had the secondary assist on Johan Franzen's series-winning goal in double overtime. It was his last point in the NHL playoffs (go to 2:38).
Thanks to NHL Video

This marked the end of his time in Detroit as Calder signed a two-year contract with the Los Angeles Kings in July of 2007. His first year in Los Angeles wasn't noteworthy as he had seven goals and 13 assists in 65 games while missing nearly ten games due to a fractured thumb. The Kings, who also had former Flyers Jaroslav Modry and, ironically, Michal Handzus, finished last in the Western Conference while the Red Wings went on to win the 2008 Stanley Cup without the help of Calder. 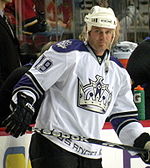 Joined by rookie forward Wayne Simmonds and veteran Sean O'Donnell, Calder was able to post moderately better numbers for the Kings in his second season with the club. Playing in nine more games (74), Calder had one more goal (8), six more assists (19), seven more points (27), and 23 more PIM (41) in the 2008-2009 season than he did the previous year. In addition, Calder's only game-winning goal in 139 appearances with the Kings came on February 5 in a 5-4 win over the Washington Capitals (go to 4:35).
Thanks to NHL Video

Despite Calder's improvement in play the Kings missed the playoffs for a second straight year with Calder on the roster and a sixth straight year overall.

After the 2008-2009 season, the Kings decided not to resign Calder leaving him searching for a job for the 2009-2010 campaign. Ultimately, Calder was invited to the Ducks' training camp in mid-September. Originally being cut by the Ducks in late September, Calder was resigned by Anaheim in late October. Instead of being on the NHL roster Calder was sent down to the Bakersfield Condors, Anaheim's ECHL affiliate. 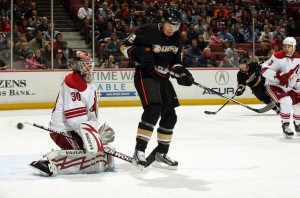 Playing in five games with the Condors, Calder had three goals and three assists before being recalled to the Ducks' roster in mid-November. In Anaheim, Calder played in fourteen games displaying horrible numbers. With no goals and just two assists, Calder posted a minus-7.

His less than exemplary work led to his placement on waivers where he was assigned to the Toronto Marlies of the American Hockey League. In 40 games for the Marlies, Calder had 14 goals and 16 assists.

Posting six points in five games for them in 2009, the Bakersfield Condors decided to resign Calder for the 2010-2011 season. In another five-game stint for the Condors, Calder had three goals and four assists before leaving for Barys Astana of the Kontinental Hockey League. 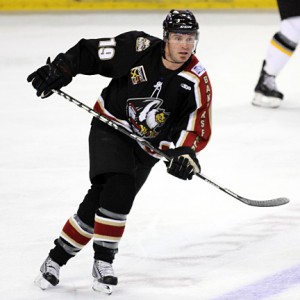 In 13 games with his new team, Calder had three goals and four assists adding on an assist in the playoffs.

Calder was not resigned by Barys Astana due to an incident during their playoff series with AK Bars Kazan.

Currently a free agent, the future doesn't look too bright for the 32-year-old Alberta native. His last goal in the NHL was in the 2008-2009 season, he hasn't broken the 30-point plateau in the NHL since his days with the Blackhawks, and he hasn't scored a goal in the NHL playoffs since 2002. At 32-years-old, Calder's best chance at still playing professionally is in the AHL or KHL with a team that's able to put aside his drunken incident with Barys Astana.