Then and Now: Ruslan Fedotenko 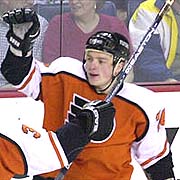 For a player who wasn't drafted, Ruslan Fedotenko has made a noticeable impact on North American hockey. Averaging less than a point every 2 games over his career (333 points in 743 games), Fedotenko has found a way to grab four game-winning scores for his team in the postseason. One of those actually clinched the Stanley Cup for the Tampa Bay Lightning in 2004, a year where — instead of die-hard Flyers fans celebrating the end of a Stanley Cup drought — Fedotenko and Dmitry Afanasenkov hoisted the Cup in Florida.

Let's look at what Fedotenko has done in addition to winning the Stanley Cup with Tampa Bay after he left Philadelphia.

Fedotenko joined the Flyers' organization during the 1999-2000 season. Sticking with the Philadelphia Phantoms all season long, Fedotenko was one of the better forwards, recording 17 goals and 34 assists in 67 games.

The following season was Fedotenko's first taste of the NHL. Playing just eight games for the Phantoms, Fedotenko stayed with the big club for 74 games and  posted 16 goals and 20 assists. He'd also produce 72 penalty miuntes, his highest total for any season by far with his 52 PIM in 2006-2007 being second closest.

Due to his inexperience and the fact the Flyers didn't last long in the playoffs, Fedontenko's playoff magic didn't kick into gear. As the Sabres beat Philly in 6 games to win their Eastern Conference Quarterfinals battle, Fedotenko's only point came on the secondary assist of Simon Gagne's first-period goal in the Flyers' 3-1 Game 5 victory.

Learning from his rookie season, Fedotenko managed to score more while limiting his time in the penalty box the following year. Playing four more games in the 2001-2002 season than he did in his rookie campaign, Fedotenko scored 17 goals and had nine assists while dropping his PIM total to 43.

In the 2002 playoffs, the Flyers were absolutely embarrassed by the Ottawa Senators in the ECQF. Losing in 5 games, Philly managed to score only two goals all series. In Game 1, both Roman Cechmanek and Patrick Lalime kept the game scoreless as it went into overtime. Almost eight minutes into the extra period, Fedotenko gave the Flyers their only playoff win in 2002 with his only playoff goal as a Flyer.
Thanks to Southrob1231

In June of that year, Fedotenko was traded to the Lightning with two second- round picks in the 2002 draft for Tampa Bay's first round pick in 2002. With their newly acquired first-round selection, the Flyers picked Joni Pitkanen, a defender who played two seasons with Philly and is currently with the Carolina Hurricanes. 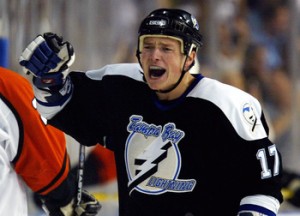 Fedotenko's first season in Tampa Bay was similar to his time in Philadelphia. He'd have 18 goals and 14 assists in 76 games while scoring only one point in 11 postseason games. As the Lightning fell to the New Jersey Devils in five games during the Eastern Conference Semifinals after beating the Washington Capitals in 6 games during the ECQF, Fedotenko's one point was the secondary assist on Martin St. Louis' first period goal in Tampa Bay's only win all series.

The 2003-2004 regular season for Fedotenko wasn't vastly different than his prior three seasons in the league. Posting 39 points in 77 games, there wasn't much indication that Fedotenko would have a memorable playoff run.

Finishing first in the Eastern Conference, the Lightning took on the eighth-seeded New York Islanders. The resurgent Bolts won the series in five games, and Fedotenko had two goals in the series — scoring once each in Game 4 and  Game 5.

Taking on the Montreal Canadiens in the East semis, the Lightning swept the series to advance to the Eastern Conference Finals to take on the Flyers. Fedotenko's only point in the short set was the winning goal in Game 1 which came early in the second period.

In the infamous Flyers-Lightning seesaw series of 2004, Fedotenko simply bedeviled his former teammates, striking for six goals and one assist in Tampa's seven-game triumph. He'd have the game-winning goal in Game 3, two goals in Game 6, and the first goal of the night in Game 7.

Now four wins away from the Stanley Cup, Fedotenko and the Lightning geared up to take on the Calgary Flames. Fedotenko played in six of the seven games needed to complete the series (missing Game 4 — the only game during the playoff run he was absent). He'd have three goals and one assist throughout the series. Two of his three markers came in the deciding Game 7, one of which was the Cup-clinching goal (go to :55).
Thanks to jerms819

In total, Fedotenko had 12 goals and 2 assists in his 22 appearances for the Lightning during the 2004 Cup-winning run. 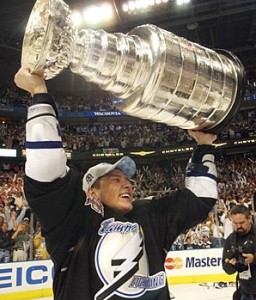 Unlike most players, Fedotenko didn't suit up for another team during the NHL's lockout of the 2004-2005 season.

One would think his lack of playing might limit his production for the 2005-2006 season. However, quite the opposite happened as Fedotenko set his current career highs in games, goals, and points in that first year back. With 26 goals and 15 assists, Fedotenko had 41 points in 80 games as the Lightning grabbed the eight-seed in the Eastern Conference to sneak into the 2006 playoffs.

Despite his impressive postseason performance in 2004 and displaying big numbers in the regular season, Fedotenko went pointless in the five games it took for the top-seeded Senators to knock out the Lightning in the ECQF.

Carrying over the disappointment from the 2006 playoffs to the 2006-2007 regular season, Fedotenko netted only 12 goals, the least he'd have in any season with the Lightning. To make matters worse, Fedotenko went pointless yet again in the postseason as he took part in only four of a six-game loss to the  Devils in the 2007 Eastern Conference Quarterfinals. 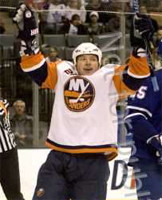 Prior to the following season, Fedotenko decided to return to the Atlantic Division and signed a one-year contract with the New York Islanders. Marred by a late season knee injury and the fact the Islanders didn't make the playoffs, the 2007-2008 regular season was an uncharacteristically rough one. Playing in 67 games and scoring 16 goals with 17 assists, Fedotenko endured his only season since joining the NHL where he wouldn't play beyond the regular season. 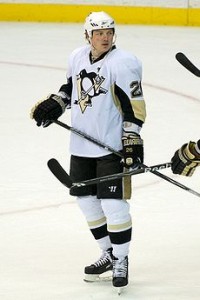 Almost a year to the date after signing a one-year contract with the Islanders, Fedotenko signed another one-year contract, this time with the Pittsburgh Penguins for the 2008-2009 season. Missing 15 games due to a broken hand after fightning Colby Armstrong in a game against the Atlanta Thrashers on January 6, Fedotenko played in 67 games and totaled 39 points, the most he had in any season since '05-'06.
Thanks to hockeyfightsdotcom

Falling two wins short of a Stanley Cup in 2008, the Penguins were looking to reach the Finals for a second straight season.

In the ECQF, the Pens took on the Flyers in a series remembered for Max Talbot "quieting" the Philly crowd to start a Pittsburgh Game 6 comeback. In the six-game series against his former team, Fedotenko scored the Pens' first goal in Game 6 to start the rally along with an assist on Mark Eaton's goal less than two minutes later. He also had an assist in Pittsburgh's Game 3 loss.

As the Penguins advanced to the ECSF they faced Alex Ovechkin and the Washington Capitals. Highlighted with a three game scoring streak from Game 3 to Game 5, Fedotenko had three goals and two assists against the Caps as the Pens won in seven games to advance to take on the Carolina Hurricanes in the Eastern Conference Finals.

Stunning the top-seeded Boston Bruins in the Eastern Conference Semifinals, the Hurricanes were looking to extend their magic to the ECF against the Pens. Unfortunately, it didn't happen as they were swept by Pittsburgh in four games. Fedotenko had a goal and an assist in Game 3 while adding on another goal in Game 4.

For the second straight year, the Penguins looked to beat the Detroit Red Wings in the Stanley Cup Finals. This time, however, they'd come out victorious. Scoring his only goal during the series in Game 1, Fedotenko also contributed two assists, one of which was the secondary helper on Tyler Kennedy's Game 6 winner.

For the second time in his career Fedotenko was a Stanley Cup Champion. With his numbers slightly lower than what he posted in 2004, his seven goals and seven assists during the run were crucial to Pittsburgh's success. 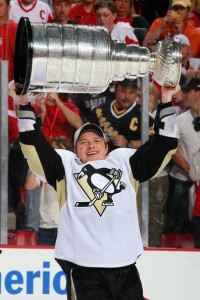 Flush with another dose of ultimate success, Fedotenko decided to spend another season in the Steel City, inking another one-year pact weeks after the title.

Scoring just 11 goals in the 2009-2010 regular season, Fedotenko netted 30 points in 80 games before the Penguins took on the Senators in the opening round of the playoffs. Taking part in only two games against the Sens and four games of the Pens next series against the Canadiens, Fedotenko went pointless in six games marking the third time he'd have a pointless postseason in a four-year span.

Leaving Pittsburgh in the 2010 offseason, Fedotenko was invited to the New York Rangers training camp in September later signing with the team in October. Missing 16 games due to a seperated left shoulder, Fedotenko played in 66 games posting career lows in goals (10), assists (15), and points (25). As the Rangers took on the top-seeded Caps in the opening round, Fedotenko had two assists in the five game series. Both came in the Rangers' double overtime loss in Game 4 before the Rangers ultimately lost the series in Game 5. 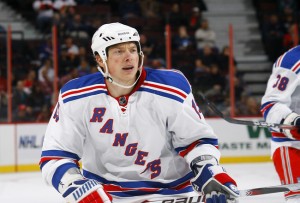 This past July Fedotenko signed another one-year contract with the Rangers. It's his sixth one-year deal over his career.

Fedotenko isn't consistent in the playoffs, but when he's hot he can help lead a team to the Cup. He'll turn 33 in January meaning his speed and ice time are most likely dwindling as well as his likelihood to have a positive impact on a team come April.

Even if his time being a clutch postseason role player are over, Fedotenko will be remembered by fans around the league.