Then and Now: Scottie Upshall 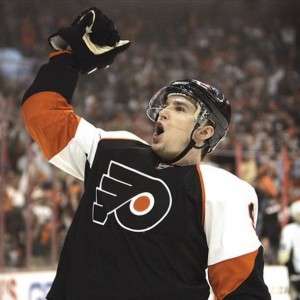 In an attempt to return the last place Flyers back to the playoffs in just one season, Paul Holmgren was aggressive in his first couple months as GM back in 2006-2007. In addition to attaining Braydon Coburn, Lasse Kukkonen, and Martin Biron, Holmgren used Peter Forsberg and the pick Nashville originally gave the Flyers in exchange for Forsberg to rob the Predators of Scott Hartnell, Kimmo Timonen, Ryan Parent, and Scottie Upshall.

As Hartnell and Timonen remain a part of the Flyers' organization, Parent and Upshall left after playing multiple seasons in Philly. Parent is currently in Vancouver while Upshall has bounced around since being a fan favorite in The City of Brotherly Love. Let's take a look at his career since his days in Orange and Black.

Two days after being traded to the Flyers, Upshall made his presence felt. In his first game with Philly, Upshall scored the Flyers' fourth goal of the game on a wrap-around shot to beat the New York Rangers' Steve Valiquette early in the third period. The goal turned out to be the game-winning goal as the Flyers went on to win 5-3.

The tally was one of six Upshall scored in his 18 games for the Flyers back in 2006-2007. He'd score three of those against the Boston Bruins, one of which was his other game-winning goal for the Flyers that season. As Sami Kapanen led him on a breakaway during overtime, Upshall pulled off an impressive reach-around backhanded shot to win it for the Flyers with just 10 seconds left.
Thanks to nameht123

Adding in the fact Upshall also had seven assists for 13 points in 18 games with the Flyers to close out the season, Holmgren decided to sign him to a two-year contract in early July of 2007. Limited to just 61 games due to ankle and wrist injuries, Upshall joined Mike Knuble and Jeff Carter to form one of the Flyers most productive lines during the 2007-2008 season. Scoring 14 goals and posting 16 assists in his lone full season with the Flyers, Upshall helped Philly return to the playoffs.

Since the Flyers finished sixth in the Eastern Conference they'd take on the third-seeded Washington Capitals in the Eastern Conference Quarterfinals. In an intense series that ultimately went seven games, Upshall enjoyed his first playoff series victory as he posted three assists during the Quarterfinals and opened the scoring for Philly in Game 7.

As Philly moved on to the Eastern Conference Semifinals, they faced the top-seeded Montreal Canadiens, a team that swept the Flyers during the regular season. After dropping the first game in overtime, the Flyers went on to win four straight upsetting the Canadiens and heading on to the Eastern Conference Finals. Upshall had three points during the series, one of which was the series-winning goal that came late in Game 5 via deflection off of a Jeff Carter wrist shot (go to 8:25).
Thanks to loksun

Upshall and his teammates didn't have the juice left for the ECF against the Pittsburgh Penguins due to injuries, and the Flyers lost in five games. Upshall not only went pointless, but also lost a fight to Tyler Kennedy. 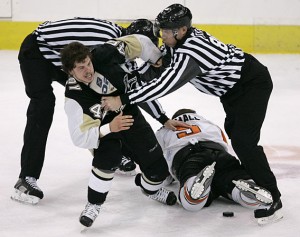 During the 2008-2009 season, Upshall played in 55 games for the Flyers scoring seven goals and registering 14 assists before he was shipped to Phoenix. Along with a second round pick in the 2011 NHL draft, with which Phoenix picked Lucas Lessio, Upshall joined the Coyotes' roster while Daniel Carcillo was shipped to Philly. 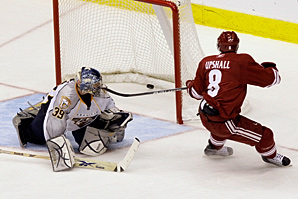 Upshall was floored by the trade. " I sat around this morning and thought I wouldn't want to be anywhere but Philadelphia after today and finish the season here," Upshall told the Associated Press the day of the deal. "It was tough to take."

Despite being upset about the trade, Upshall had an immediate impact on his new team. Playing in just 19 games for the Coyotes to finish out the season, Upshall scored eight goals, one more than he had in his 55 games for the Flyers earlier that season. Adding on five assists to his goal total for Phoenix in the limited number of games, Upshall earned himself a one-year contract from the Coyotes late in July of 2009.

The 2009-2010 season was a year of mixed feelings for Upshall. Despite posting his career highs in goals and points, Upshall most likely ended the season wondering what could have been. Missing a couple games due to upper and lower body injuries, Upshall had 18 goals and 14 assists in 48 games before tearing his ACL against the Calgary Flames in his 49th game of the season. He'd miss the final 27 regular season games as well as all of the Coyotes' seven game loss in the Western Conference Quarterfinals to the Detroit Red Wings. 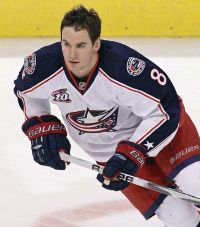 This past season was Upshall's first season in the NHL where he played 82 games, the equivalent of a full season, but the total didn't come in typical fashion. After posting 16 goals and 11 assists in in 61 games with the Coyotes, along with a two-game suspension for a late hit on Oskars Bartulis, Upshall was traded for the third time in his career. This time, he joined the Columbus Blue Jackets along with Sami Lepisto in exchange for Rostislav Klesla and Dane Byers. In 21 games for the Blue Jackets, Upshall had six goals and one assist.
Thanks to NHLArchive

This past July, Upshall signed a four-year contract with the revamped Florida Panthers. 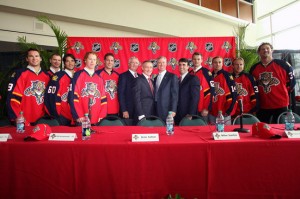 Upshall was a great pest and energy player in his time with Philly. When he traveled to Phoenix and Columbus he experienced a little more scoring and high point totals. With the help of new additions Ed Jovanovski, Jose Theodore, Marcel Goc, Tomas Fleischmann, Sean Bergenheim, Brian Campbell, and Nolan Yonkman, Upshall is looking to push the new look Panthers into the playoffs for the first time since 2000.

Can Upshall be a leader for Florida or will he return to his agitating form from Philadelphia?