Utley, Pence, and Rollins Swing for the Fences in 7-1 Win over Braves 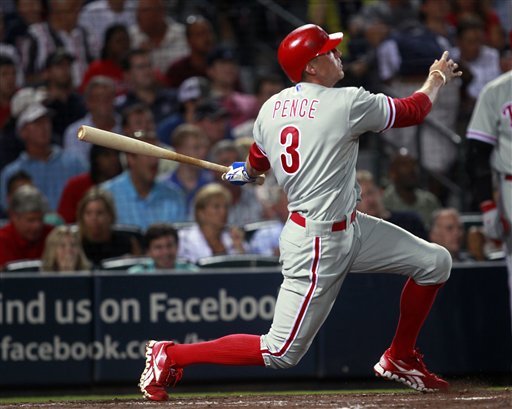 8-Game losing streak? Ha! I barely remember it. The Phillies have been playing hard so far in this series, with the offense that we all expect, and the pitching that we all love to see.

Chase Utley got the ball rolling tonight with a solo home run in the first inning. It was his third since July 29th.

In the top of the third, Jimmy Rollins singled to right to score Carlos Ruiz. Following that, Hunter Pence popped up a sacrifice fly to score Roy Oswalt. 3-0 Phils. In the fourth, Shane Victorino cruised home on Placido Polanco's sac fly, extending the lead to 4-0. Derek Lowe had already been removed from the game at this point. Another rough outing against the Phillies for Lowe.

With Jimmy Rollins on base in the fifth, Hunter Pence completely annihilated a baseball stretching the already comfortable lead to 6-0.

Roy Oswalt was absolutely dealing, flashing his best stuff on the mound tonight. Through six, little Roy had allowed just three hits. He tossed 85 pitches total this evening, walking one and striking out four. Needless to say, he was in postseason mode.

Just for the hell of it, Jimmy Rollins crushed a home run to right field, giving the Phillies a 7-0 lead in the seventh inning. Joe Savery came in to pitch the bottom of the inning, and retired the side perfectly, striking out Brian McCann in the process.

For the first time in a long time, Antonio Bastardo had it tonight. He pitched a scoreless eighth inning, striking out Michael Bourn to end it.

With a 7-0 lead going into the ninth, Kyle Kendrick came in to close it out. Martin Prado put the Braves on the board with a lead off, solo homer to left field. However, Kendrick sent down the rest of the order, helping the Phils with win number 101.

With tonight's win, the 2011 Phillies have tied the franchise record in wins with 101, Charlie Manuel is now tied with Gene Mauch for winningest manager for the Phils (645), and the Braves will have to keep fighting for their lives to make it to the postseason.

Tomorrow night, the Phillies will look for win number 102, which will be the most wins in franchise history. Joe Blanton takes the hill tomorrow against Tim Hudson in what will hopefully be a series sweep in the last series of the regular season. This is the end, folks, until October, that is.