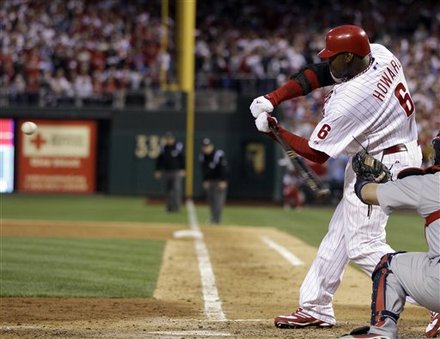 Ryan Howard's three-run home run in Game 1 gives the Phillies the advantage and momentum in the series. (Courtesy of SI.com)

Roy Halladay enters the field and takes his warmups to the same Led Zeppelin remix every home start. The one song in the mix is titled "Good Times, Bad Times." That could be the perfect summary to Game 1.

Cliff Lee's music as he takes the mound for Game 2 of this best of five seems just as fitting. It's "Stranglehold" by Ted Nugent. That's what the Phillies are going for in this game.

In order to get that huge hold on the Cardinals, they need to beat the best thing the Cardinals can throw at them. Making his first career start on short rest is Chris Carpenter. Carpenter finished the season by putting the Cardinals into the playoffs, winning on the season's final day by pitching a two-hit shutout.

The good news for the Phillies is that quite a bit rides on the Cardinals. Tony La Russa already stated that Carpenter's shutout is the reason he's starting here. They could be hoping for a repeat performance. That shutout came against the MLB-worst Houston Astros. He had to keep his team's hope alive by performing similarly against baseball's best team this season.

The Phillies could go either way here. They could sink the Cards with a similar offensive explosion, or really beat the Cards at their own game.

With Lee facing Carpenter, chances are very slim the final score ends up being 11-6. Still, the Phillies' offense packed quite a punch, and they could easily be back at it again.

The Cardinals may or may not have Matt Holliday back in the lineup. The key for Lee remains at the heart of the Cardinals' order. Keeping Pujols and Berkman off the board is what causes the Cards to fall.

Carpenter's pitching could be better than what Kyle Lohse was throwing in the early innings of Game 1, but could last even longer. The Phillies can't let chances to score pass by, and they need to approach Carpenter the same way they approached the Cardinals' pitching for the last few innings yesterday. Patience will be key, and after burning four pitchers in Game 1, the Cardinals are trying to avoid extensive use of the bullpen at all costs.

Here's a closer look at the starters followed by a prediction.

Cliff Lee (17-9, 2.40 ERA)
Lee allowed two runs over six innings in the Phillies 100th win of the season last Monday against the Braves. He lasted six innings and allowed five hits. Lee has lost only one game since August. He has not faced the Cardinals since his shutout in June. In four career starts against the Cardinals, Lee is 3-1 with a 1.48 ERA. In 10 Postseason starts, Lee is 7-2 with a 2.13 ERA.

Chris Carpenter (11-9, 3.45 ERA)
Carpenter's last start was four days ago against the Houston Astros. He allowed two hits in a shutout. He shutout the Phillies through eight innings in a game on Sept. 18, allowing eight hits along the way. In 11 career starts against the Phillies, Carpenter is 7-2 with a 4.14 ERA. In nine Postseason starts, Carpenter is 5-2 with a 2.93 ERA.

Lee held the Cardinals to a shutout once this season. His experience then will mix with his playoff experience, and he should have an excellent night.

The offense will do just enough, managing something off Carpenter to give Lee some breathing room.

Lee's lone run allowed comes early, possibly another first-inning Cardinals' lead, but it is nothing the Phillies can't work around.