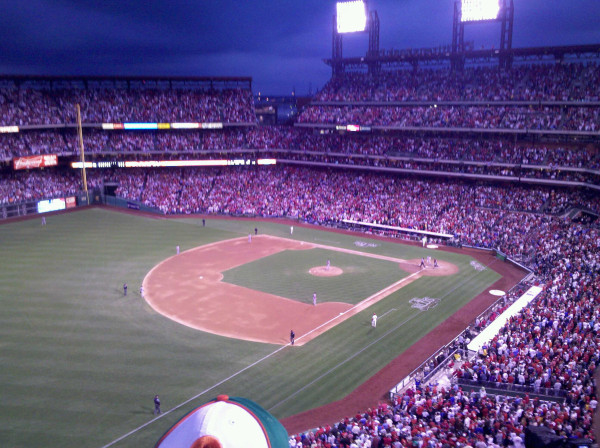 Roy Halladay allowed a leadoff single to Rafael Furcal, walked Albert Pujols on four pitches and allowed a three-run home run to Lance Berkman to hand the Cardinals a quick 3-0 lead. Pretty much nothing after that… Halladay retired the last 21 batters he faced while striking eight, one walk.

As for Cardinals pitcher, Kyle Lohse went on cruise control through the first three innings. He threw just six pitches in both the first and second innings, and he tossed just 23 pitches through the third, using 22 sinkers and one changeup as the Phillies were retired in order.  PANIC TIME!!!!!

but wait for it…

As Halladay was setttling down after the crazy first inning…. Shane Victorino singled in a run after Cardinals third baseman David Freese dropped a foul ball (which was an error), a gift run in fourth inning.

But really things got started in the sixth inning, Ryan Howard crushed a three-run homer to give the Phillies the lead. It was his first postseason homer and RBIs since Game 6 of the 2009 World Series, after having none in nine postseason games in 2010. Raul Ibanez followed two batters later with a two-run homer to make it 6-3.

The Phillies added three runs in the seventh and two runs in the eighth to make 11-3. The Cardinals scored three times in the ninth off relievers Michael Stutes and Ryan Madson to make the final score 11-6.

Game 2 is Sunday night, with Cliff Lee pitching for Philadelphia against Chris Carpenter, who is starting on three days' rest for the first time in his career @ 8:37pm on TBS.