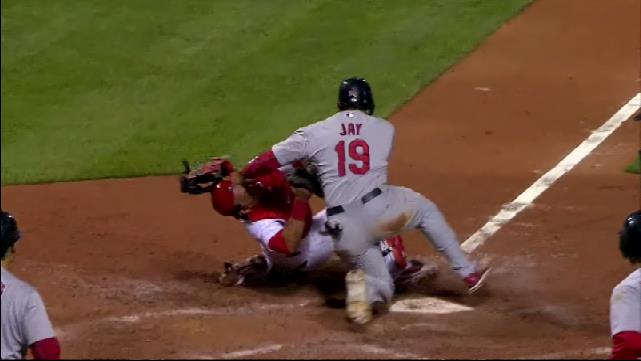 A full house of 46, 575, the largest crowd at Citizens Bank Park in history, were waving their rally towels all throughout the game, even when it got really, really ugly.

A bit of nail-biting came into play after Rafael Furcal took the first pitch of the game over the head of Hunter Pence for a triple. However, he would be stranded there as Cliff Lee struck out Allen Craig and Lance Berkman in the inning, not allowing a run to score.

Jimmy Rollins got the ball rolling in the bottom of the first with a lead off double. Following that, Chris Carpenter walked both Utley and Pence. Suddenly, the Phillies took a 2-0 lead after Ryan Howard singled off of Chris Carpenter and into center field. After Shane Victorino popped-out, Raul Ibanez served a single to left field to score Hunter Pence. 3-0 Phillies.

An easy 1-2-3 inning with two strikeouts for Cliff Lee in the second inning was a thing of beauty for the Phils. In the bottom of the inning with two outs, Jimmy Rollins came inches away from a right field home run, but would trot to second base with a double. Following another walk to Utley, Pence singled to right field to score Jimmy. 4-0 Phillies.

Following a scoreless third inning from both sides, the Cardinals finally got to Cliff Lee in the top of the fourth. Lance Berkman, the Phillie killer, walked to start the inning. Yadier Molina then singled. Next, Ryan Theriot doubled, scoring Berkman. John Jay then singled up the middle to score Molina, cutting the lead to two runs. Rafael Furcal singled, scoring Theriot, after Cliff Lee struck out pinch-hitter Nick Punto. The inning ended with Raul throwing out John Jay at the plate. Carlos Ruiz somehow held on, applying the tag, while being completely trucked. HUGE play. 4-3 Phillies.

After four innings, Chris Carpenter's night was complete. Fernando Salas came in and somehow shut down the Phillies in the fourth and fifth inning.

In the sixth with two away, Ryan Theriot doubled to left field, followed by a single from John Jay, which tied the game at four a piece. Cliff Lee reached 101 pitches at the end of the inning, when he got Rafael Furcal to ground into a force out. With that, Vance Worley began warming up in the bullpen.

Octavio Dotel came in for the Cards in the sixth inning, and tossed a 1-2-3 shutout inning. The Phillies had not hit since the second inning, and the bullpen had retired thirteen in a row.

At 101 pitches, Cliff Lee came out for the seventh. Brad Lidge was then warming up, no longer Worley. Allen Craig quieted with a leadoff triple to left-center, over the head of Victorino. Then, Albert Pujols completely destroyed every last ounce of hope that we had and singled to score Craig. The Cardinals had taken the lead at 5-4. After Berkman singled, Cliff Lee's night was finished.

Even though the strike zone was all over the place tonight (thanks, Jerry Meals!), Cliff Lee struck out nine on the night. The rest of his line: Seven IP, 12 hits, five earned runs, two walks. The 12 hits tied a career high, and Cliff tossed a total of 110 pitches.

With the Cards leading and two men on, Brad Lidge came into the game. Pujols was stuck in a rundown, and was tagged out for out number one. Next, Ryan Theriot grounded into a double play. Thank God for Lidge. Seriously.

Ross Gload came in to pinch hit for Lee, and that's when Tony LaRussa brought in Rzepczynski, and Charlie Manuel brought in Ben Francisco to replace Gload. After two outs were quickly recorded, Jimmy Rollins got the first base hit since the second inning, a single to left. The inning ended when Rollins was tagged out at second on a stolen base attempt.

Antonio Bastardo came in for the eighth inning, walking the lead off batter. After a successful bunt attempt from Daniel Descalso, Furcal struck out swinging. Vance Worley then replaced Antonio, recording the third out via pop-up.

Chase Utley was hit by a pitch which led off the inning, and sparked Tony LaRussa to change pitchers. In came Mitchell Boggs. Hunter Pence grounded into a force out, getting Chase at second, who took down Ryan Theriot with a slide, so no play at first. Arthur Rhodes replaced Boggs with Howard up, and struck him out swinging on three pitches. With two gone, LaRussa made another pitching change, bringing in Jason Motte. Smart move, because Shane popped-up to end the eighth.

Ryan Madson recorded the first two outs of the ninth with a beautiful strike out-throw out combination, catching Pujols in a run down, then struck out Chambers to end the inning.

Two quick outs from Raul Ibanez and Placido Polanco kicked off the bottom of the ninth, followed by a groundout from Chooch just seconds later. Phillies drop game two.

Game three will be Tuesday at 5:07 in St. Louis. Cole Hamels against Jaime Garcia.