Phillies’ Ryan Howard’s At-Bat Music: “All I Care About is Money and the City That I’m From” 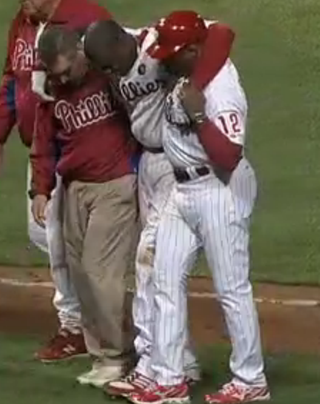 What an awful loss, and what an awful injury to Ryan Howard.  An achilles tear could knock Howard out for much of the 2012 season.

At last night's game, Ryan Howard stepped to the plate in the 7th inning (the infamous 3-0 swing at-bat).   His choice of music of "I'm On One" by D.J. Khaled was unbelieveable and incredibly ironic.:

All I care about is money and the city that I’m from
I’ma sip until I feel it, I’ma smoke it till it’s done
And I don’t really give a fu–, and my excuse is that I’m young
And I’m only getting older so somebody should've told you

2) "And the city that I'm from" – Ryan Howard hails from St. Louis, home of the opponent the St. Louis Cardinals

3) "I don't give a f— my excuse is that I'm young" – Phillies fans constantly bemoan the Phillies' age.

4) "I'm only getting older so someone should have told you" – ouch.

I could not believe what I was hearing as the song was played.  Howard has alternated "I'm on One" with "Otis" by Jay-Z and Kanye West.   This was played at what may have been his most crucial at-bat.

Speaking of Ryan Howard, coming up I will look at the prospect of a Howard-less lineup next year, and see what life would be like without him.

Check out the song here: