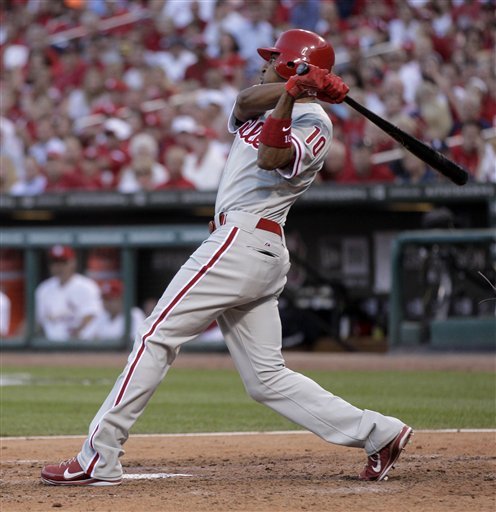 You would never believe me if I had told you this morning that Ben Francisco would be Philadelphia's savior tonight. I still can't believe it, and it all happened back in the seventh inning. Tonight's game is a prime example of why you cannot and should not predict baseball.

This game began as a pitcher's duel, needless to say. However, Jaime Garcia was arguably out-pitching Cole Hamels, even though Cole (5 K) had picked up more strikeouts than Garcia (3 K, two to Howard) in the first five innings of the game.

Hamels' pitch count had reached 86 through five innings, so it was tough to see him go out there for the seventh or eighth. Garcia's count was at 51.

In the top of the sixth with two away, Chase Utley smacked a single up the middle for the third hit of the game for the Phils. To stay on the safe side, Garcia intentionally walked Hunter Pence to face Ryan Howard, which paid off when Howard grounded out to end the inning.

The bottom of the inning wasn't a pretty one for Hamels. Having reached 100 pitches, Hamels allowed another single to Ryan Theriot, which was the third of the game. Cue Vance Worley starting to warm up. Following that, John Jay walked, and Jaime Garcia struck out swinging on pitch number 117 to end the inning, marking Hamels' eighth strikeout on the night.

The Phillies threatened in the seventh with Shane Victorino leading the inning off with a single. After a passed ball to Molina, Shane advanced to second. With two batters quickly gone, Carlos Ruiz was intentionally walked to get to Ben Francisco who came in to pinch hit. Big mistake.

Ben Francisco, Benny Fresh, slammed a three-run home run into the Phillies' bullpen in left field, pushing the Phillies to a 3-0 lead. It was Ben Fran's first home run since May 25. Four words: You can't predict baseball.

Vance Worley came into the game in the bottom of the inning, and it all kind of blew up in his face. After Allen Craig walked and Pujols singled, David Freese singled to score Craig. Yadier Molina was the final out of the inning, popping up to Pence. Worley made it out alive, but just barely.

Following a scoreless inning for Fernando Salas, Ryan Theriot blooped a singled off of Vance Worley to make it a 4-4 night. That would be all for Vance, as Antonio Bastardo made his way into the game. Young, filthy bastard did his job, recording the first out. With Matt Holliday on deck, Brad Lidge came in, but allowed a single to Holliday, then Rafael Furcal singled, loading up the bases. Just like that, Ryan Madson came into the game for a 5-0ut save. The first two outs were recorded via double play, which ended the eighth.

In the ninth inning, Albert Pujols led it off with his third double of the night. Lance Berkman then popped one up to Victorino. One gone. Next up is David Freese, who grounds out for out number two. Yadier Molina then scored Albert Pujols from third on a single. Then, with Theriot up, Ryan Madson recorded out number three.

Phillies take game three of the NLDS, and have a 2-1 lead over the Cardinals in the series. Tomorrow night at six, Roy Oswalt will take the mound for Philly against Edwin Jackson at Busch Stadium. If the Phillies win, they're in the NLCS.