Then and Now: Andy Delmore

The Flyers' Eastern Conference Semifinals series against the Pittsburgh Penguins in 2000 will forever be remembered for Keith Primeau's game-winning goal in Game 4 that came in the fifth overtime. Primeau's goal may have not been as dramatic if the goal didn't tie the series at two games apiece creating a surge of momentum for Philly. After losing both games at home to open the series, the Flyers and Penguins took Game 3 into overtime after Jaromir Jagr's second goal of the game (he had five in the series including both of Pitt's game-winning goals). Just over 11 minutes into overtime, Andy Delmore found the back of the net to give Philly their first win in the series. This was Delmore's biggest goal as a Flyer. The next game was Primeau's overtime winner and in Game 5 Delmore led the Flyers to victory by netting a hat-trick as Philly took the series in six games. Let's take a look now at Delmore's career since that series and the time he's spent playing for 13 different teams since then.

After the semifinals, the Flyers were devastated in the Eastern Conference Finals as they blew a three games to one lead over the hated New Jersey Devils losing in seven games. The Devils then went on to beat the Dallas Stars in the Stanley Cup Finals.

This wasn't the end of Delmore's time in Philly as he returned for one more season. During the 2000-2001 regular season, Delmore had five (should of had six) goals and nine assists in 66 games as the Flyers finished fourth in the Eastern Conference hosting the Buffalo Sabres in the quarterfinals.

During the offseason, the Flyers moved Delmore to the Nashville Predators after signing veteran Eric Weinrich. In exchange for Delmore the Flyers received Nashville's third round pick in the 2002 NHL Draft, a pick that was ultimately transferred to the Phoenix Coyotes.

"At his age for him to be the seventh man on our defense, we felt that it was better for us to move him and better for his career," former Flyers' GM Bob Clarke told SportsLine.com about the trade.

Once in Nashville, Delmore exploded offensively. After totaling 30 points in 115 games with the Flyers over three seasons, Delmore had 38 points for the Preds in just 73 regular season games during the 2001-2002 campaign. Despite his offensive outburst, the Predators missed the playoffs finishing 14th in the Western Conference.

The following season, 2002-2003, Delmore played in less games than the 2001-2002 season and had less assists but was able to score more goals. Putting in two more goals, Delmore had 18 in the 2002-2003 regular season as well as 16 assists for 34 points in 71 games for the Predators. Nashville once again missed the playoffs finishing 13th in the Western Conference.

During the 2003 offseason Delmore was traded to the Buffalo Sabres for a third round pick in the 2004 NHL Draft. 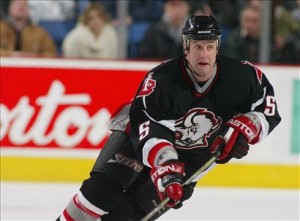 Delmore's time in Buffalo was rough as he missed 11 games due to a groin injury and lacked offensive production. He only played in 37 games for the Sabres and eight games for the Rochester Americans, Buffalo's AHL affiliate, totaling nine points before being part of a three-way trade resulting in him as a Boston Bruin. He was shipped to the San Jose Sharks with Curtis Brown for Jeff Jillson and a ninth round selection in the 2004 NHL Draft before being traded to Boston for future considerations.

Delmore didn't play in any games for the Bruins and left the team after the 2003-2004 season after the team didn't make a qualifying offer for him over the summer of 2004.

During the lockout, Delmore played in the Deutsche Eishockey Liga (DEL) for the Adler Mannheim Eagles. He was joined by other NHLers Jochen Hecht, Rene Corbet, Steve Kelly, and Cristobal Huet. In 50 games, Delmore had seven goals and 16 assists before helping the Eagles fall just short of the DEL Championship in the postseason. His regular season work earned him a spot at the DEL All-Star Game.

Following the lockout, Delmore was on four different teams in a two month span. He was signed by the Detroit Red Wings in August of 2005. Late in September, Delmore was assigned to Detroit's AHL affiliate, the Grand Rapids Griffins. Less than one week after being assigned to the Griffins, Delmore was placed on waivers where the Columbus Blue Jackets picked him up. Then, a week after being picked up by Columbus and playing in just one game for the Blue Jackets, Delmore was sent down to Columbus's AHL affiliate, the Syracuse Crunch.

In seven games for the Blue Jackets in the 2005-2006 season, Delmore had no points and had a plus/minus rating of -1. However, for the Syracuse Crunch, Delmore set his career high for assists and points with a single club in a single season posting 55 assists and 72 points in 66 games. His impressive season earned him the AHL's "Eddie Shore Award" which goes to the league's best defenseman.

Delmore's offensive touch didn't extend into the postseason as he only had an assist in the six games it took the Manitoba Moose, the Vancouver Canucks AHL affiliate, to knock out the Crunch in the opening round of the playoffs.

Following the 2006 AHL playoffs, Delmore was signed by EHC Basel of Switzerland's National League A (NLA). He wouldn't stay long as he signed a one-year contract with the Tampa Bay Lightning just over a month after signing with EHC Basel.

Similar to what happened to him the season before, Delmore was sent down to the Tampa Bay Lightning's AHL affiliate at the time, the Springfield Falcons, in late September. Spending his whole time with the Tampa Bay organization in the AHL, Delmore had 12 goals and 12 assists in 47 games for the Falcons before being traded in February of 2007.

Delmore was shipped from Tampa Bay, along with Andre Deveaux, to the Atlanta Thrashers for Kyle Wanvig and Stephen Baby. Within the same day, he was sent down to the Thrashers' AHL affiliate at the time, the Chicago Wolves. Delmore would play in 28 games for the Wolves scoring five goals and registering 11 assists during the regular season.

In the 2007 AHL playoffs, Delmore played in all 15 of the Wolves' postseason matches posting six assists as Chicago fell to the Hamilton Bulldogs, the Montreal Canadiens AHL affiliate, in five games during the third round of the playoffs.

Playing on four different AHL teams over a span of two seasons, Delmore decided to take his talents back to the DEL. Instead of rejoining the Adler Mannheim Eagles, Delmore signed a contract with the Hamburg Freezers. It was here that Delmore settled down for two seasons. In his first season with the club, Delmore had 35 points for the Freezers in 51 games. He'd only have one assist in the playoffs as the Freezers lost in the Quarterfinals. 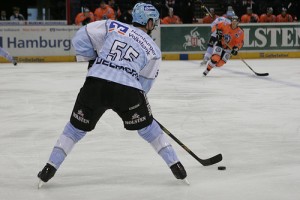 For the 2008-2009 regular season, Delmore played in one more game for the Freezers than he did the previous season but posted four less points scoring nine goals and assisting on 22 goals. Despite this fact, Delmore earned a spot at the DEL All-Star Game for the second time in his career.  As the Freezers lost in the quarterfinals again, Delmore had a goal and three assists this time around.

After the 2009 DEL playoffs, Delmore decided to return to the NHL signing with the Detroit Red Wings for the second time in his career. Just like his first time with the Wings, they sent him down to the Griffins just before the season started. In 54 games for Grand Rapids, Delmore had five goals and 15 assists before being traded yet again.

In early March of 2010, the Red Wings sent Delmore to the Calgary Flames in exchange for Riley Armstrong. Sent down to the Flames' AHL affiliate, the Abbotsford Heat, Delmore played in just nine regular season games scoring a goal and posting three assists.

In late August, Delmore signed a contract with KHL Medvescak Zagreb of the Erste Bank Eishockey Liga (EBEL), Austria's highest-level ice hockey league. So far with his latest team, he has earned the honor of being alternate captain despite going pointless in seven games so far this season.

Not taking part in an NHL game since the 2005-2006 season, it's safe to say Delmore's hunt for the Stanley Cup is over. However, deep postseason runs with the Chicago Wolves and Lorenskog IK shows there's a chance Delmore can be a part of a championship team at some level of hockey. At 34-years-old, Delmore's time is running out as he searches for his first professional championship.