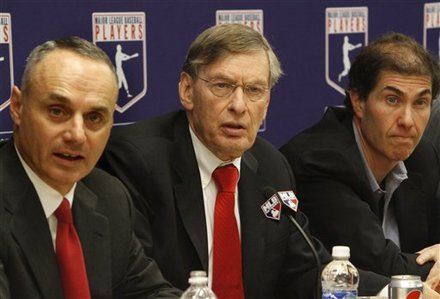 A strike-shortened season in 1994 cancelled the World Series. Since then, baseball has been committed to making sure that the Fall Classic gets played every year. With the agreement on a new collective-bargaining agreement, a five-year deal expiring in December 2016, major league baseball has done just that, marking another five years of peace between owners and players. That will put the league at over 20 years of peaceful negotiations.

In the new CBA, baseball has made several changes. For those of you who haven't been following the negotiations, or who may just not understand the new changes, here's a look at what was announced today.

Baseball's new changes bring about some favorable reviews and some questionable calls. Sure, aligning the divisions creates a balance that every other major sport has, so moving one National League team to the American League makes complete sense.

However, what do we need an extra playoff team for? Wasn't this Postseason a sign that the playoff system was fine just the way it was? Actually, what this Postseason didn't do was force the owners and players to change their minds about a playoff system that had change already in the works. This expansion was being talked about prior to this Postseason. Now, they have simply put it in effect. While I don't agree with the addition of another wildcard, the one-game playoff is a great way to implement the new system.

The expansion of instant replay forces serious consideration of the next step. The only other possible play left that could be deemed reviewable is safe/out calls. With the next expansion of replay, baseball may want to invest in a challenge system similar to the NFL. Give managers two challenges a game and use replay then. It keeps the human element in the game while using replay to ensure most calls on the field end up correct.

Finally, the interleague play increase is both good and bad. While it takes away from the division games, thus possibly eliminating rivalries, it does give teams a chance to face every team within a few years, and also could force closer races in all divisions, which could increase the number of races in the later stages of the season.

Most of these changes will go unnoticed or have little effect on the way the game is for the fans. But the fact that baseball managed to reach a deal with such ease after two extensive lockouts in other major sports shows that they not only still care about the good of the game, they made it a point to finish the deal as soon as possible. Now there are no worries for five years, and changes from now until then will likely be at a premium because of all of the changes already on hold for the 2013 season. Still, a lot is changing in baseball, but it is still going strong after all these years.