Phillies Give Permission to the Cardinals to Interview Ryne Sandberg 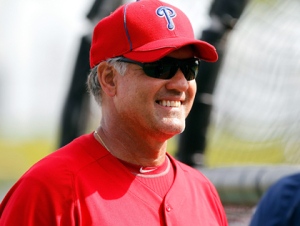 Let’s begin the Sandberg speculation of where in the world will he be in 2012!

Ryne Sandberg is still under contract with the Phillies, even though he only signed a year deal to manage the Phillies Triple A team, IronPigs. The Phillies have mentioned they want to bring him back in 2012 after a great season with their first postseason appearance. Yes, he did very well in managing a Triple A team. And the Phillies will not stand in his way if he gets a possible promotion as a major league manager.

After firing Mike Quade, Theo Epstein doesn’t want a manager who doesn’t have major league experience. I guess we can rule out Ryne Sandberg to the Cubs. However, the Cardinals (YES, the one that LaRussa managed with all the pitching changes) asked the Phillies permission to interview him.  And it was granted. Maybe Sandberg to the Cardinals.  Or maybe he stays with the Phillies if current bench coach Pete Mackanin goes to the Boston Red Sox.

Drama is only about to begin in Philadelphia! Stay tuned!