The Phillies Will Be Heard on the FM Dial in 2012 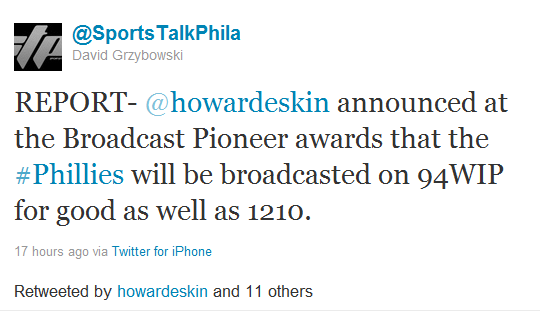 According to David Grzybowski of La Salle University's Sports Talk Philadelphia, Howard Eskin announced last night at the Broadcast Pioneer Awards that the Phillies broadcasts will be broadcast on the new 94 WIP as well as 1210 AM.

Previously, Phillies Radio Network producer Ian Cohen told me that WPHT's long-reaching signal was something keeping the Phillies on the AM dial.  However, those of us living near trackless trolley lines, train lines, or near the Market-Frankford elevated line know that the strong signal can be moot.   Now, the Phillies will have the best of both worlds.

So far WIP's move to the FM dial has been well-utilized, as the station has used the AM station to broadcast Sunday night and Monday night football while maintaining local programming on the FM dial.