Eagles Flyers Phillies Sixers About Us Write For Us
Marlins signing Reyes shouldn't affect Phillies in 2012
So, Despite Reports, Jimmy Rollins Did NOT Have Surgery on Thursday

Albert Pujols Introduced to the Angels; Looks like Impact on Phillies is Minimal 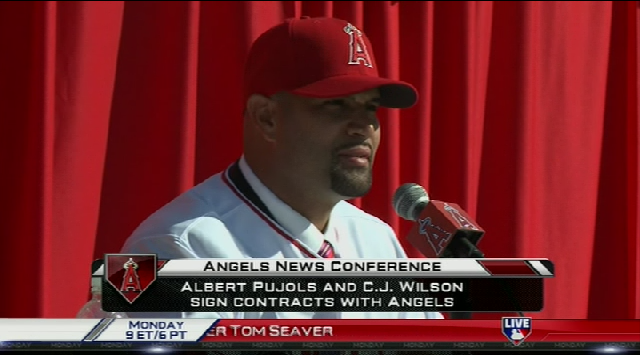 After Albert Pujols signed a 10-year contract with the California, er, Anaheim, er, Los Angeles Angels of Anaheim, some wondered the ripple effects that this deal could have with the Phillies, particularly with shortstop Jimmy Rollins, given the Cardinals' need for a shortstop.

Why would people connect Rollins and the Cardinals?  Presumably, the Cardinals would like to add offense where they have openings in the wake of losing Albert Pujols.   However, as it turns out, the Cardinals went to their deadline aquisition Rafael Furcal as the two sides agreed to a two-year contract .

Besides, as many have pointed out: Jimmy Rollins has the same agent as Albert Pujols.  Would they really want to negotiate with them now?

So what other possible suitors exist for Jimmy Rollins?

The Brewers agreed to a one-year contract with Alex Gonzalez.

The Giants are broke, and as a result are turning to Melky Cabrera and Angel Pagan for their outfield rather than singing Cody Ross or Carlos Beltran.  They have no money to spend on a shortstop and instead will focus on extending Tim Lincecum with their money.

The Red Sox have Jed Lowrie, Marco Scutaro, and prospect Jose Iglesias at shortstop and Rollins would be an upgrade, but the two sides have not been connected.

The Minnesota Twins are going with utility man Jamey Carroll as their starter.

Clint Barmes got a two-year deal to start for the Pirates.

Yuniesky Betancourt is still available as a free agent.

It looks like the sides can just assume that something is going to get done, unless someone who already has a shortstop is ready to jump in.