Could Aramis Ramirez Sign With the Phillies? How, Why, and What About Placido Polanco? 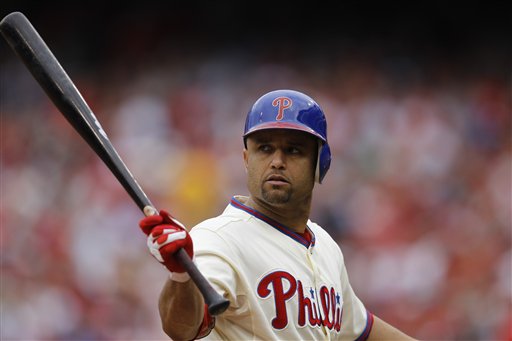 Well, it's lunch again, so I guess I have some time to post something, and the reports that the Phillies are interested in 3B Aramis Ramirez and also shopping Placido Polanco certainly have given me something to muse while I eat my sausage gumbo.

Why might the Phillies make such a move?  Here are the reasons I could come up with off the top of my head while eating:

1. Ramirez is an offensive upgrade over Polanco and fits the lineup better.

Perhaps this is the most obvious.  Ramirez is a right-handed power bat capable of driving in runs and hitting fifth in the Phillies lineup.   Polanco projects to be a seventh-hole hitter these days, rather than the prototypical number-two hitter that he was most of his career.

2. Polanco Has Trade Value and Could Fill Needs Long-Term or Present

Signing Ramirez as a free agent costs no players, other than a draft pick.  Placido Polanco could be a worthy trade gamble for a team not willing to commit long-term to someone such as Ramirez.  Polanco could fill an immediate gap at either second or third base for a team such as the Detroit Tigers, who loved Polanco and have lost Carlos Guillen to free agency while Brandon Inge mostly vanished from productivity.  Polanco would be a perfect fit for the Tigers.

What could the Phillies get in return?  Well, the team could certainly use a left-handed reliever and maybe a right-handed outfielder should Ben Francisco be non-tendered.   An emerging, productive player with options could help the Phillies this year as they balance keeping Thome on the roster with Ryan Howard's injury and eventual return.

Additionally, after this year Polanco will leave as a free agent and the Phillies will get nothing in return.

3. The Phillies Have No Long-Term Plan at Third Base

While Polanco could play third for the Phillies in 2011, what happens after next year?  Polanco is towards the end of his major-league career and is probably not a candidate to be re-signed after this year.   The only real infielder prospect the Phillies have remotely close to the major leagues is Freddy Galvis, and he may be more important in the immediate future if the Phillies do not re-sign Jimmy Rollins.  While sentiment makes most Phillies fans want Rollins to re-sign with the club, it may not be very realistic.

Polanco is set to make $7.25 million this season.   Ramirez may cost $14-15 million a year, and trading Polanco could help defray the cost.   If not for money, I would prefer Polanco stay as a utility player, perhaps playing second base while Chase Utley plays first in Ryan Howard's absence.   Reports Howard could be back before the season seem a little overly-optimistic.

Jimmy Rollins could walk for money and extra years.   It's a real possibility.  Should Rollins be lost, the Phillies could hand shortstop to the defensive (though not offensively apt) Wilson Valdez until prospect Freddy Galvis is ready.   Maybe Galvis emerges before the trade deadline and is promoted, or maybe the Phillies go out and trade for a stopgap SS at the deadline.

This lineup would work just fine without Jimmy Rollins:

Of course, with Ryan Howard out it looks like this:

Even if the latter lineup is employed temporarily, that should be enough offense to sustain the Phillies' pitching.

Of course it could.  Most of Amaro's moves have suggested a need to stay fresh and upgrade positions even marginally to be a better team.

Ruben loves the big splash.  Here's his chance for this offseason.   Do we really know him to sit still and be patient?