The Emotion Behind Jimmy Rollins’ Current Status in Baseball 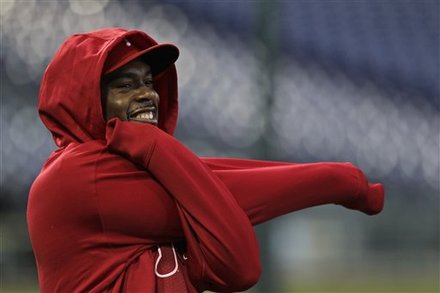 Just in case you haven't heard it a million and one times already, Jimmy Rollins is looking to return to the Phillies in 2012. Ruben Amaro Jr. and the rest of the Phillies front office would also like to see a J-Roll return, but the two sides will have to agree on either a three year deal, or a five year deal.

Rollins wants the five year deal because he wants to stay in Philadelphia until he retires. Once a Phillie, always a Phillie. His skills and talents have been developing– or declining here since 1998, making him the longest tenured Philadelphia athlete that the city has ever known. Of course he wants to stay, so what would be the point in leaving a city that you've known for your entire career?

The problem here is: Who wants to see a 38 year old Rollins in 2017? Jimmy, I love you dearly, but let's not get carried away.

I don't believe that he'll get the contract that he wants. In fact, I can see Jimmy playing in Philadelphia for the next three years, then calling it quits. I don't think anyone would be interested in him at that point anyway.

The teams interested in him now might as well keep looking. Jimmy's agent is scheduled to meet with Amaro during the winter baseball meetings which start on Monday, December 5th in Dallas, reports insider Jim Salisbury. The hot stove is starting to heat up.

Hypothetically speaking, what if Rollins decides to sign elsewhere? Hell will break loose in the city of brotherly back-turning love.

Did this not already happen? Jayson Werth was booed mercilessly every time he stepped up to bat at Citizens Bank Park in 2011. So he took the money and ran, so what? If you were Jayson, you would have done the same thing. Imagine Jimmy Rollins doing that, taking the money and running. Are you going to boo him when he's visiting Philly with his new team?

As a young Phillies fan, I've grown up watching one shortstop over the span of these last five years. If Jimmy were to leave, I would be quite heartbroken. Hell, I was feeling some pain when Jarred Cosart and Jonathan Singleton were traded away for Hunter Pence.

The impact that Rollins' departure would have on his fans would have the same immensity as the rest of the team leaving with him. Jimmy Rollins has been with us through it all these past 11 years. The years that made the incredible 2007-2008 teams, which were the ones to beat.

Rollins carried that 2007 team, and since then, he has done everything in his power to make sure the Phillies win games, take titles, and become champions. Jimmy is one of the eight players on the 25-man roster that were on the 2008 team. The rest include Blanton, Kendrick, Hamels, Ruiz, Victorino, Utley, and Howard. Wow.

Needless to say, it's scary to think about the emotion behind Jimmy Rollins choosing to play elsewhere. Here's to hoping that the meeting between Amaro and J-Roll's agent results in a contract that leaves Jimmy in Philly for a few more years.