People Really Paid Money For These: Most Ridiculous Phillies Jerseys

Posted by Frank Klose and @PatEgan

Every once in a while I'll snap a picture of a jersey I see at a Phillies game that just seems too ridiculous to ever wear, and a friend introduced me to Pat Egan, who does the same.

WMMS - What would Mike Missanelli say: a violation or no?

These are some baseball jerseys seen in and around Citizens Bank Park. 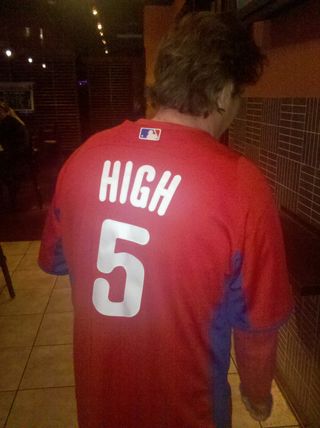 This guy was in the Sports Bar in the Holiday Inn before the Phillies playoff game.  He could afford the ticket but not a real jersey?   I assume this guy was being cute, but maybe he's named High?  I don't know; maybe he was high when he ordered this. 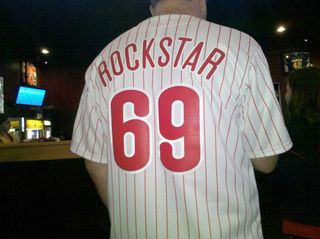 Now this one is really cool: not only did he pick the best number ever, but he's a rockstar too. 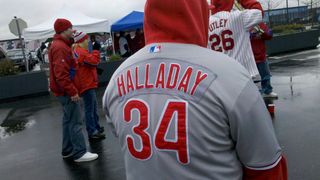 Best way to get the most out of your $17 bootleg jersey from China when Cliff Lee gets traded and Roy Halladay takes his number?   Take a patch of a different color gray, and get the letters to spell the name of the next player with that number.   This is a great idea; I am going to make sure I make my Greg Dobbs jersey into a Michael Martinez jersey. 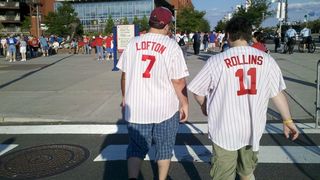 These block-lettering jerseys really bother me.  The color does not match the Phillies red, and the font is nowhere near what the Phillies use.

I have fond memories of 2005, especially when Kenny Lofton said,  "I'm not going to run into that wall. I'm not stupid. I'm not going to kill myself. It's tough when you go after a ball at full speed. You want to go, but you tell yourself, I have to stop."

I feel bad for this guy; six whole years have passed and he could not afford a respectable jersey. 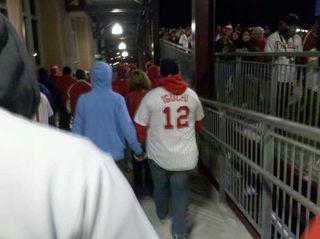 I see this guy at the park regularly, including this playoff game.  I did enjoy 2007 as well, but I think he has had time and probably the money to buy a new jersey. 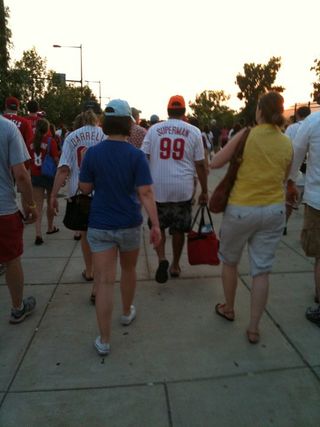 Here's a great way to spend $200. Buy a Phillies jersey, put the number 99 on the back, and then put a fictional superhero that you don't resemble at all on the back. 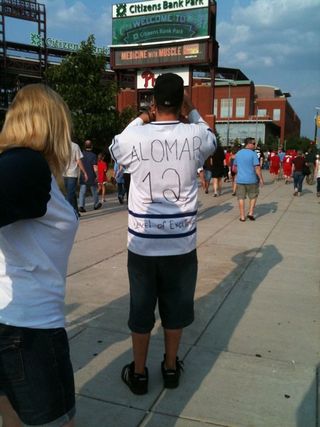 Rule of thumb never sharpie on a jersey and try and go to a pro game with it. Screams, "trailer park." 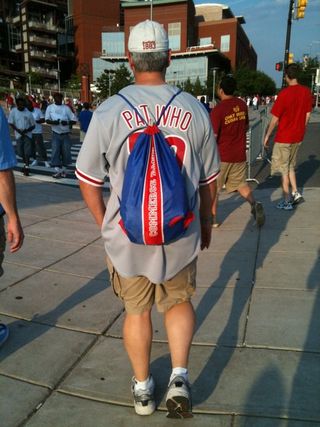 Well this is looking like a great investment. #29 "Pat Who" jersey.  He probably could have made his point more respectably by buying an actual Raul Ibañez jersey. 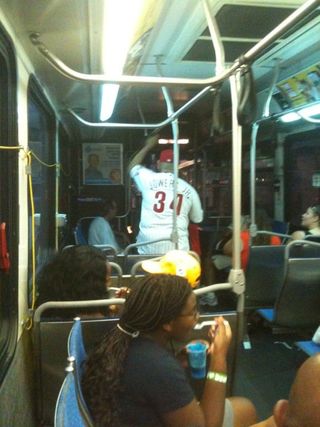 Ladies and gentlemen, we present to you Jowers Jr. The man, the myth, the moron who gets this jersey with Roy Halladay's number. 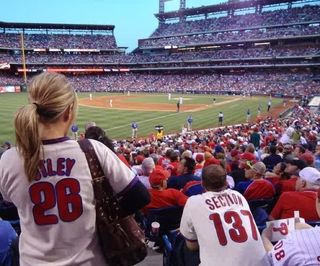 I hope this guy has to change his season tickets. 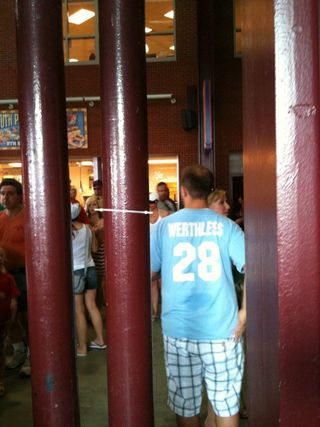 OK - I get the whole "Werthless" thing, but why the turqoise blue? 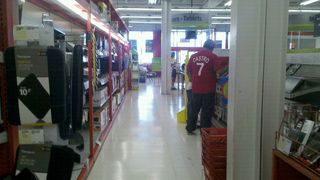 Finally, Juan Castro will forever be in Phillies lore, thanks to making the final out of Roy Halladay's perfect game.  However - a Castro shirsey? A bootleg one at that?