Eagles Flyers Phillies Sixers About Us Write For Us
Phillies and Cole Hamels Agree to Final Arbitration Year; I Say Give Him $20 Million a Year
Retired Phillies Broadcaster and Brewery Employee Andy Musser Passes Away; Some Links to Remember Him 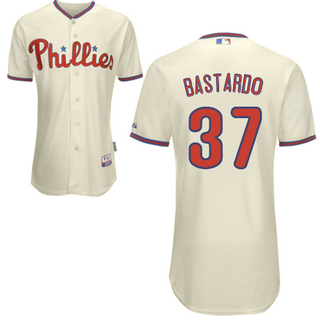 Citizens Bank Park will look odd this season with many familiar numbers going to new players.   Some Phillies fans, such as @socuttered, spent the whole time since the Papelbon signing trying to figure out what number beloved Antonio Bastardo would wear.

Further, many beloved Phillies' numbers have been reissued.  In the past, the Phillies tended to hold out of circulation a number belonging to a favorite player, but with all the player movement this year,  it appears it was unavoidable.

Also, there is some bad news, as some of your favorite bench players switched numbers, making your jersey obsolete.

With a shot to make the club: