Eagles Flyers Phillies Sixers About Us Write For Us
3-on-3 Weekly Update:1.24.2012
People Really Paid Money For These: Most Ridiculous Phillies Jerseys 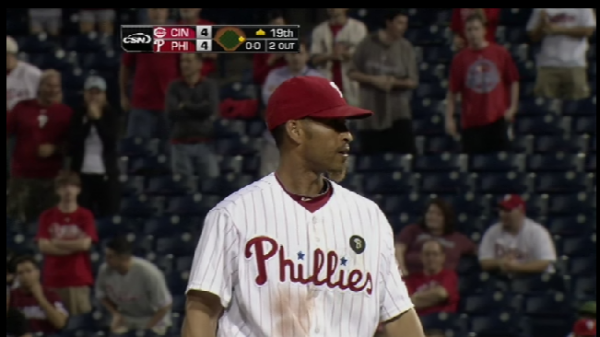 Well, despite delivering the most memorable pitching performance of the 2011 season, the Phillies have traded backup infielder Wilson Valdez Cincinnati Reds, reported Jim Bowden on MLB Network Radio's "Inside Pitch".

Now the question becomes: who becomes the backup shortstop?

I would surmise that Michael Martinez would be the initial backup infielder, but if he were to fail or the Phillies would need someone long-term Freddy Galvis might get a shot.  I felt Wilson was a much superior fielder to Martinez, but the Phillies control Martinez long-term and he will save them about half a million bucks.

Or, as Jeff Rickard suggested on "Inside Pitch", the backup shortstop could be on another roster right now.

The Phillies receive LHP Jeremy Horst in return.   Horst has appeared in 12 games in his short major league career to the tune of a 2.93 ERA, and could start the year in AAA or potentially beat out Dontrelle Willis for a bullpen spot, who does not have a guaranteed contract.