Ryan Howard Set to Begin His Journey Back from Achilles Injury 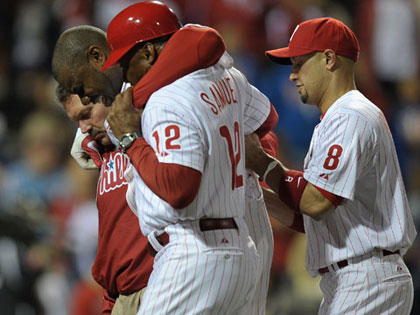 Remember Ryan Howard? Remember the doomsday drama as the final out in NLDS? Yeah, let's forget about it…

How about I give you an update on the situation, which is certainly some great news….

According to Todd Zolecki, Ryan Howard was cleared on Thursday by the doctors to begin strength and power exercises after undergoing surgery on his left Achilles' in October. Howard will start by jogging underwater. Sounds fun, right? On the other hand, Ryan Howard could be cleared for baseball activities within six weeks as he will begin fielding groundballs before moving ahead with hitting.

It's one step closer to a return. When will it be? If Ryan Howard is cleared to begin baseball activities within six weeks, which is also the beginning of Spring Training. Is it possible to see The Big Piece penciled in the Opening Day lineup?   Maybe, but we shall see as it gets closer if no barring setback.

“I can’t even speculate,” Amaro said. “All I know is that it’s nice to know that at some point in Spring Training, that he’ll start doing some light baseball activities. I think it is good news.”

Take your time. No need to rush. Good luck with your journey back!