A Phillies – Nationals “Rivalry?” What Rivalry? 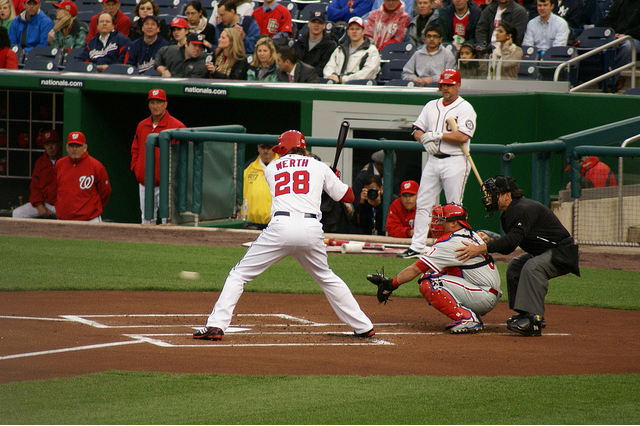 They're not the Mets, in fact they're not close to the Mets. The Mets, no matter how bad they are, are our rivals, at least to me. I grew up with a saying of "any team that can see the New York skyline is no good to me," and well, the Mets are the team that can see it and plays my favorite team. I do hate the Washington Nationals though. I hate them in that "you're annoying, go away" kind of way.

As commenter Gus said on a different piece, the Nationals have 128,917 Facebook fans, and the Montreal Expos have 128,121. Frankly, I think the people of Montreal were more deserving of a team. This is pretty much emblematic of my disdain for DC sports in general, as while I don't like New York teams, I love New York City and New Yorkers, and respect their teams and fans in a begrudging kind of way, usually. With Washington, it's just not always like that.

The Nationals are kind of worse though. You can't find Wizards fans, and they're so pathetic they don't count. I say re-name them the Bullets. The fans of the Redskins kind of do get that begrudging respect from me. The Capitols? That's a hipster thing down there I think (not serious, but it is a fad).

The Nationals are the ones that bother me down there though. Obviously, the Jayson Werth thing really figures in. I wanted to trade the guy in 2010 when we were talking about it, because honestly, he kind of annoyed me as a Phillie even, despite the face he was a big factor in our winning. So when he signed there, for THAT contract, I just took it as license to dislike him.

Then there's all the Strasburg hype before he even threw a pitch. Bryce Harper? Very possibly the biggest douchebag in professional sports. I can't wait to let that kid hear it in Philly. I guess Wilson Ramos and Ryan Zimmerman are ok right now, but I'll figure out a reason to dislike them. And Davey Johnson, ex-Mets manager, total loser to me. Add in Harry Kalas dying in their God-forsaken ballpark, and you have a recipe for me to just disregard their humanity.

The six Nationals fans out there like to crow about winning the season series in 2011, but I'll remind them that they won four games after we had clinched everything, and that got them a 10-8 season series win. Nice job in garbage time. All we did was clinch the division against you guys how many times in recent years?

When the Nationals fans complain about us filling their ballpark, I simply laugh. I used to hate the Mets fans coming to the Vet, or to Citizens Bank Park. I would have been livid if we pulled this kind of PR stunt though. Here's the reality, build a team and people will come.

The Phillies haven't averaged under 30,000 fans since they opened this park. By comparison, the Nationals haven't had 30,000 fans a night since year one. Take our money and shut up already! You want good players right?

With all of this said, my dislike could turn into a real rivalry soon. Let's be honest, the Phillies and Braves just don't dislike each other. I don't really believe in the Marlins yet, although having Reyes will make me hate them. The Mets are a disaster. So who else is left? Just those Nats. The Nats who have put together a nice little rotation. They became a .500 level team last year, and have talent. They hope for healthy seasons from Strasburg and Zimmermann on the hill, and for the arrival of Bryce (yuck) Harper this season or next. As these events happen, they will improve. Now, to be fair, I'm not bought in- they were willing to commit seven years and $126 million to Jayson Werth, but $0 and zero years were spent to bring Prince Fielder to town? Even so though, just one good pennant race, just one NLCS, just one head to head battle, and we'll be there.

With my dislike of the Nationals out there, I'll say that they are simply not our main rivals, or our rivals period at this point. Win something and we'll talk. I'll also take it a step further though- I hope this becomes a rivalry. A real good, intense rivalry involving the Phillies is good for baseball, and good for the Phillies.