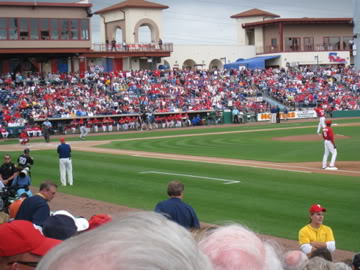 This Wednesday night, the Phillies will host the Florida State Seminoles in their annual pre-Grapefruit League exhibition match up. The Phillies will send out righthander Austin Hyatt to start the game. The 25 year-old Hyatt posted an excellent season for double-A Reading in 2011. He went 12-6 with a 3.85 ERA in 28 starts with 171 strikeouts and 49 walks in 154 1/3 innings.

A few Phillies people have compared Hyatt's stuff to that of Kyle Kendrick, with more strikeout prowess. Hyatt doesn't have overpowering stuff, but "sneaks up on you," said one evaluator. So the Phillies will see how that fares in triple A, and maybe he provides starting depth. - Matt Gelb

The Phillies-FSU game will begin at 1:05 PM ET. It will be the first MLB exhibition game of 2012, just three days before Grapefruit League games begin. The Phillies will host the Yankees in the opener in Saturday, followed by another game between the two on Sunday in Tampa.