Have the Phillies and Cole Hamels Already Agreed to a Contract? 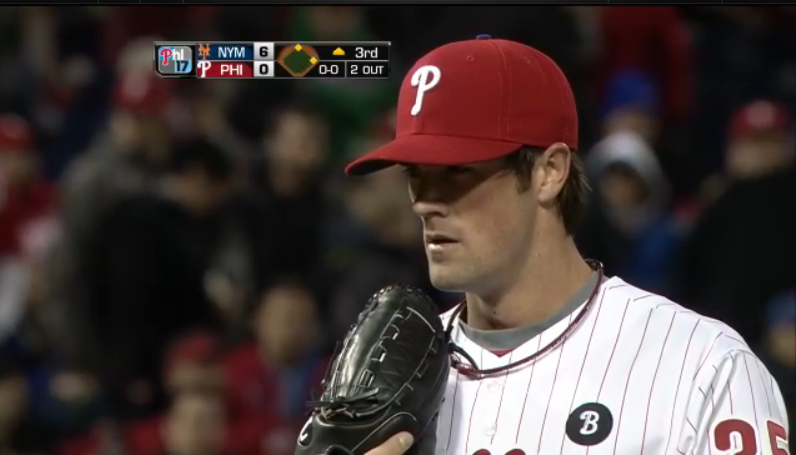 Prior to the 2011 MLB season, the Boston Red Sox acquired 1B Adrian Gonzalez from the San Diego Padres, in exchange for three highly-regarded minor league prospects. Despite Gonzalez' status of one of MLB's elite hitters, it was an expensive price to pay, considering that Gonzalez would be eligible for free agency after the season. (Gonzalez was under contract only for 2011, at a bargain salary of $6.2MM.)

In the 48 hours prior to the announcement of the trade, the Red Sox met with Gonzalez' agent, John Boggs. The two parties did not come to a long-term agreement, but sources indicated that there was "enough common ground for a deal to be struck." On April 16, 2011, two weeks into the regular season, the Red Sox announced that they had reached an agreement with Gonzalez, on a 7 year, $154 million deal.

The timing of the new contract announcement was extremely advantageous for the Red Sox. If they had announced a deal prior to the start of the regular season, Gonzalez would have counted for $20.025MM towards the 2011 luxury tax (8 years/$160.2 MM= $20.025MM "cap hit"). But announcing a deal after the 2011 season started kept Gonzalez' 2011 salary, for luxury tax purposes, at only $6.2MM. This gave the Red Sox more room under the 2011 luxury tax threshold, and more time to determine how to accommodate Gonzalez' $22MM salary, in subsequent seasons. This scenario is eerily similar to the Phillies' current situation with LHP Cole Hamels, and it wouldn't be surprising if it plays out in a similar fashion.

Should the Phillies try to retain Hamels for the long-term?

Short answer: Definitely. It often seems that Hamels doesn't get enough credit as he should, as a result of pitching in the same rotation as aces Roy Halladay and Cliff Lee. But Hamels is coming off another stellar season (5th in MLB xFIP: 3.02), and he is only entering his Age 29 season. Hamels is one of MLB's best, and is just entering his prime seasons. It is not unrealistic to think that, barring injury, he could be a top pitcher for at least the next five seasons. With Halladay and Lee now in their mid-thirties, retaining Hamels would ensure that the Phillies still have a #1 starter, even if (when) Halladay and Lee decline.

The Phillies have plenty of money, why don't they just announce a Hamels extension right now?

The Phillies definitely have plenty of money to sign pretty much whomever they want these days. They do, however, want to stay under the luxury cap threshold in 2012. Exceeding the cap in 2012, by any amount, results in a 20% tax penalty on the amount of the overage. But, perhaps more importantly, if the Phillies exceed the cap in 2012 AND in 2013, the penalty on the 2013 overage will be applied at 30%. Given the Phillies' rising revenues, and the contract situations pending for 2013 (Pence arbitration, Victorino free agency), it wouldn't be surprising if the Phillies were planning to exceed the luxury tax threshold in 2013, but want to keep the '13 penalty at 20%.

Can the Phillies afford a long-term deal with Hamels?

Of course. With a huge television contract coming relatively soon, the Phillies have plenty of money to retain Hamels, even if they have to "overpay."

Does it make sense for Hamels to agree with the Phillies, rather than test free agency?

As a free agent, Hamels would certainly attract a lot of interest. With multiple teams in the running for his services, his future salary should be driven up. However, Hamels has a good situation in Philadelphia. He pitches for a habitual contender, with a packed stadium every night, with a veteran team where the pressure is shared. Hamels would be paid like a #1 starter for the Phillies, but would not face the level of pressure he likely would with another organization.

The biggest reason that Hamels should agree to a deal with the Phillies, as soon as possible, is the potential of an injury. Hamels might get a few more million by waiting for free agency, but an injury in 2012 could cost him $100s of millions.

It makes too much sense for both sides to agree to a deal, shortly after the season begins. The Phillies can afford to "overpay", especially in the latter years of a long-term contract, when the new television contract takes their revenues through the metaphorical roof. Waiting for free agency is a totally unecessary gamble for Cole Hamels. A "reasonable" deal for Hamels would likely be in the neighborhood of 5 years/$100MM ($20MM AAV). Don't be surprised to see an agreement announced in mid-April, in a "much less reasonable" neighborhood. A 7 year/$160MM deal ($18MM-$20MM-$20MM-$22MM-$24MM-$28MM-$28MM) seems about right.