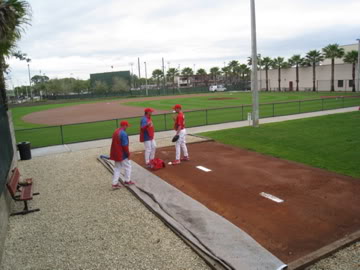 As full-squad workouts began today and there is injury news already for the Phillies' pitching staff.

Righthander Justin DeFratus will be shut down for at least a week due to elbow tenderness. He will be re-evaluated by the team doctor next week.

"We'll just slow him down," Phillies' GM Ruben Amaro Jr. said. "It's early and we want to be conservative with him."

Cliff Lee did not throw  a bullpen session, which was scheduled yesterday, today due to abdominal soreness. Amaro said it was "normal soreness" and said he did not know if the team would slow down Lee's routine.

Good news for Jose Contreras, who threw off a mound for the second time after elbow surgery today. All seemed well after the session. Amaro and assistant general manager Scott Proefrock watched from a balcony and left impressed.

"He threw really well today," Amaro said. "We were very encouraged with how he threw. More importantly, he was really encouraged. That's real important. Once you go through a surgery, there's always some tentativeness there. He had a really good demeanor when he walked off the mound. That's a very, very good first step."