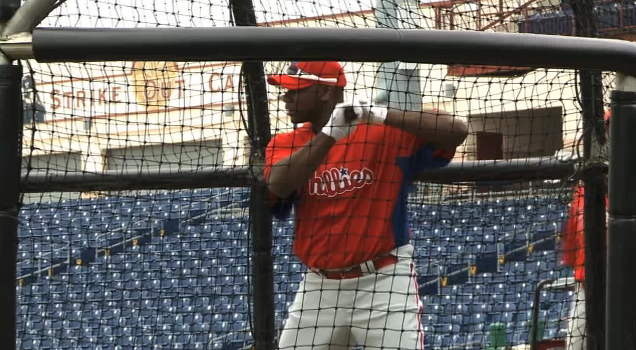 Yesterday afternoon, the Phillies stated that Ryan Howard would be making a trip to Baltimore to see a specialist for a "routine checkup" related to his left Achilles'. Although the Phillies said it wasn't a "setback", many of us wondered what was really going on. Well today it was cleared up a bit, Phillies' athletic trainer Scott Sheridan announced today that Ryan Howard has developed a reaction to his stitches, and that it is not a serious matter.

"The last couple days he developed what we think is a delayed reaction to his sutures," said Sheridan. "He's going to be traveling to Baltimore where he's going to see [Dr. Mark Myerson] tomorrow. Mark is going to evaluate him and then we'll determine what his treatment plan is from there."

Sheridan went on to say, "He did not have a setback. We just need to have this one area evaluated. It's just something that happens as part of the rehab process. The achilles tendon is notorious for not healing well, the skin over top of it. Sometimes these things happen, that's why when you look at setting time frames you never say somebody's head or behind schedule until he's on the field."

"Ryan has been doing great. He's been on the field doing the things we expect of him at this point and we just hope things keep going in the right direction."

You can watch Sheridan's interview here.