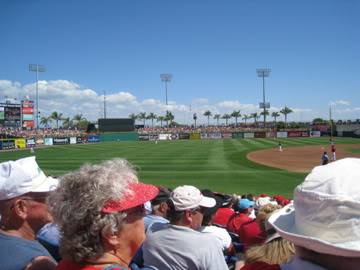 The Phillies are done B.S-ing around with their little workouts. It's time to start playing some baseball! The Phillies will host the Florida State Seminoles tomorrow afternoon at Bright House Field in Clearwater @ 1:05 PM ET. I honestly don't know if it's being broadcast on TV, but I know it will be on the radio. You can listen to the game on 94.1 WIP FM and on 1210 WPHT AM.

The Phillies will send out Austin Hyatt to start the game against the Seminoles. Hyatt went 12-6 with a 3.85 ERA in 154 1/3 innings (28 starts) with double-A Reading last season.  Hyatt will be followed by Jake Diekman, Jeremy Horst, Michael Schwimer, Joe Savery, J.C. Ramirez, B.J. Rosenberg, and Phillippe Aumont on Wednesday.

Now the material you've all been waiting to read.

Charlie Manuel said the Phillies won't play Chase Utley or Placido Polanco tomorrow so they can ease back into things.

Finally, baseball is back and so are the Phillies. Let's Go Fightin's!

Hello ufdrewd ufdrewd,
Are there pictures of these two jerks out there, so I can know them if I see them? promgtkvrbr
good ufdrewd!!