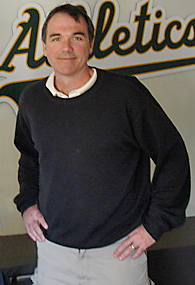 Billy Beane, General Manager of the Oakland Athletics, spoke at Villanova University as part of a panel discussing the effect of "Moneyball" on the economics of sports.

The Phillies team lost out on signing free-agents such as Bobby Bonilla the year before to the Mets and instead filled the roster with plattoon players such as Milt Thompson and Jim Eisenreich.  The collective approach of that Phillies team would end up being the inspiration for the now-famous approach to assembing a baseball roster:

"I was right here in Philadelphia watching the World Series…Those '93 Phillies took a ton of pitches, walked a ton, and scored a ton of runs. That's when it hit me."

Though Beane's Athletics teams have not ever won the World Series, they have been competitive many times despite a small payroll.

Beane also reflected upon his time as a roommate of former-Phillie Lenny Dykstra.  Both were drafted by the Mets.  Though messy with personal finance, Dykstra apparently kept other aspects of his life in order:

"He was the neatest roommate I ever had."

Beane reportedly recently signed a new deal to remain the Athletics' General Manager, with potential opt-out clauses should the team not be successful in their attempts to relocate the franchise to San Jose.