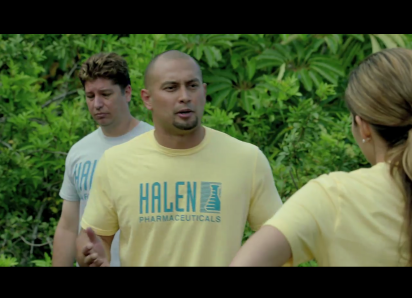 The CBS hit show Hawaii Five-0  has grown to become a staple in my Monday night rituals. I come home from work, take a shower, pop a seat on my bed and begin winding down while watching television. I usually record a bunch of TV shows on my DVR just incase I miss the show. Shows like CBS' How I Met Your Mother and Two and Half Men,  along with History Channel's Pawn Stars are usually waiting for me when I get home. Enough about me and my business, let's get down to the real story.

Tonight's episode of Hawaii Five-0, titled "Kupale (Defender)" was a special one. Not only was it a new episode, but Phillies' outfielder Shane Victorino and Olympic Gold Medalist Apolo Ohno appeared in the episode. The episode's plot revolved around the murder of a man dressed as a Hawaiian warrior for a reeanactment. Victorino played a business man named Shaun, quite well actually, on a company retreat while Ohno, who had a longer and more detailed role, played a history buff named Seth Burgess who helped the Hawaii Five-0 team solve the case.

Here is the clip of Victorino on Hawaii Five-0.

Now I'm not going to tell you what happened exactly because that would just be wrong. I hate when I set a something record and I always find out what happened because someone opens their mouth, so I won't do the same to you. But, Shane and Apolo did a great job acting.

Victorino has not yet arrived in Clearwater, but I wouldn't be surprised if he decided to quit baseball to become a full-time actor (just kidding, I'd be devistated).