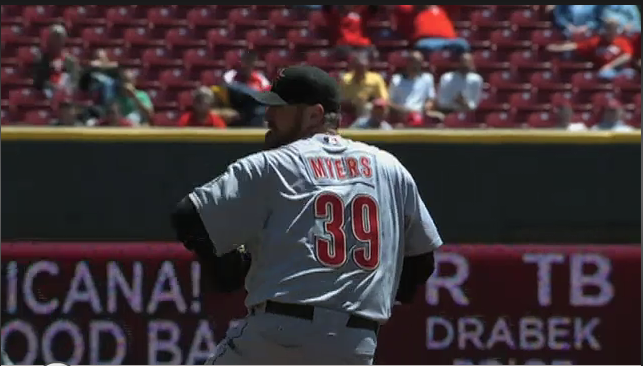 Back in 2007, the Phillies had two things:  six starting pitchers, and one of the worst bullpens ever assembled.

They really had no choice but to make Brett Myers a start.   In 2007 the Phillies had the following in their bullpen:

That's 19 relievers, most of whom were mediocre.  It took Ryan Madson finally starting to come to form down the stretch and the waiver claim of J.C. Romero to stablize the bullpen enough for the Phillies' first N.L. East Championship since 1993.

Brett Myers made the jump to the bullpen while Tom Gordon was still on the active roster.  It was only a matter of time (as we saw) that Gordon's arm fell off and Myers was a closer.

As a reliever, Myers saved 21 out of 24 opportunities, and we all remember this scene when the Phillies won the division in 2007:

The Astros current bullpen situation is akin to that 2007 Phillies team.  The current Astros relief corps includes/may include the likes of the following:

Yeah, I'd say they could use Brett Myers in the bullpen.

Truth be told, there is plenty of good news for Brett Myers.

First, he is set to make $11 million this year, more than more-established closers Ryan Madson, Brian Wilson, Heath Bell, Matt Capps, Joe Nathan, Jose Valverde, and many others you probably would prefer to have over Myers.

Second, if he does a decent job as a closer (not even great), he could be a good trade candidate at the July 31 deadline.  What team does NOT need bullpen help at the deadline?  Myers could go from the basement-dwelling Astros to a team with a chance to win.

P.S. - He's looking a little chubbier than ever