What To Watch For In Clearwater- The Outfield 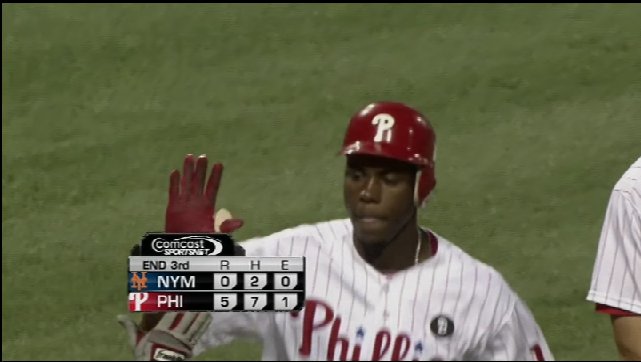 Well, having completed the infield, it's time to take a look at the Phillies Outfielding situation. At short and third they lack upper level depth, and at first and second they lack a clear direction for the future. In the outfield? There's talent, and questions.

First thing's first- the first two will certainly start, the next two will certainly make the team, and everything else is a guess. The guys I list in the upper levels of the minors could be on this team, and maybe even play. Looking into the future, Victorino will likely seek a multi-year deal beyond 2012, with a raise on his 2011 salary, making this potentially his final year here. Pence will do the same dance the year after. Mayberry is somewhat of a question mark as a possible starter, meaning the future is wide open here. The minor leagues may have the answers to the future.

So let's take a look at what's there.

The Phillies lack the "sure things" you would hope to have- the closest thing being Dom Brown, who has holes in his game coming into camp. He and Podsednik should be viewed through a separate view than the rest of these guys, as they are coming to camp to win big league jobs. There is a ton of talent in the lower levels here, but all of it has some red flags. James and Castro will likely go to Reading, and hopefully will show a "jump" from their .270 range of hitting, and turn into guys that might play later for the Phils. Gillies is kind of a mystery, as he could start in Clearwater, Reading, or even Allentown, being that he's on the 40 man roster. I suspect that Greene will play in Williamsport this summer, and move from there, as well as play some GCL ball. Altherr is likely to start in Lakewood, where we should hope to see him break out. Hewitt is hanging on as a "prospect" at this point, and that's to say he's even going to be around by season's end. He just hasn't "got it" yet.

The Phillies have to hope that Brown begins to live up to the hype this year, either in Philadelphia or Allentown, and becomes a starter going forward for this team. They need him to. They could have at least two openings going forward, maybe three in the outfield, and all of the lower level talents will have a chance to advance and become a part of that discussion too. It's in the Phillies best interest for these guys to do so, and make the team cheaper.