What To Watch In Clearwater- First And Second Base 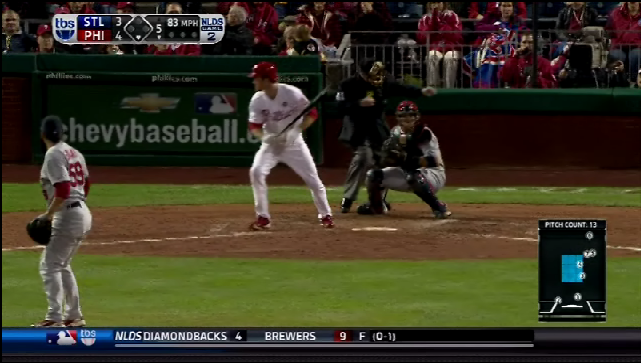 In the Phillies front office, there is a lot more to watch in Spring Training than just the big leaguers and if they get their needed at-bats before the season. There's an entire system to build, at each position, to give maximum future payroll flexibility to build the team up. Two of the premium positions for the Phillies to watch are two of the most secure current spots on the roster- first and second base. The Phillies will spend $35 million on the two spots in 2012, and have a combined $155 million tied into their two incumbents going forward. So, with that, let's look at the positions.

THE BIG LEAGUERS
First Base-

Ryan Howard
Second Base-
Chase Utley
MLB Bench Options-
Jim Thome
Ty Wigginton
Michael Martinez
That's what you have on the big league team. Basically, Utley and Howard are still very, very good players, but could very well be into their declines now, based on stats. Both have injury issues (Utley's knee issues early last year, Howard's achilles now), and both are now at 32 plus. The odds of the Phillies carrying both into the future is very unlikely. Utley has two years left on his deal, and Howard has five. The odds are that either Chase will walk, or Ryan will be traded. While none of these bench players are adequate future starters, Wigginton is a very useful bench presence who can spot either of these guys, and will do so for Howard early. Martinez is a career back-up at best, and will probably split his time between the Phillies and Iron Pigs.
So what's down the line? Let's take a look at the right-side of the infield in the minors, at some of the players who might play a role with the Phillies in the future.
UPPER LEVELS (AA and AAA)
Cody Overbeck
First Base- Iron Pigs in 2011
Matt Rizzotti
First Base- Reading in 2011
Harold Garcia
Second Base- Reading in 2011
Pete Orr
Second Base- Philadelphia/Lehigh Valley in 2011
LOWER LEVELS
Cesar Hernandez
Second Base- Clearwater in 2011
Darin Ruf
First Base- Clearwater in 2011
Jim Murphy
First Base- Lakewood in 2011
Clearly, there is depth at first base, but no blue-chip prospect who is ready or will be ready to replace Howard anytime soon. The opposite is true at second- they lack depth, but have some premium talent. Hernandez and Garcia both project to make the big leagues, and it's arguable one may turn into a starter, if all goes well. Overbeck and Rizzotti both have a shot, as Ruf may too. One could argue that none will start though. Overbeck and Rizzotti have advanced power to hit that many homers in upper levels, and Ruf's power is improving yearly. He has a big year in front of him in Reading.
Over the long term, it's important we keep our eye on the ball- Howard and Utley won't both be with this team in five years, and one major factor of which one stays around long term is what kind of prospects emerge that could be starters. If you asked me today, the best chance to be a future starter here is Cesar Hernandez, meaning the Phillies easier position to replace is second base. Basic logic would say that means Utley is easier to lose, but hang on. Utley is likely to need to move to first in the long term, and that could make it easier to move Howard (since he can't switch to let a cheaper player take his position). In the long term, I like where the franchise is at with second base, where I see two players with solid ceilings, but i'm nervous about first. The Phillies will likely have to hang on there with an aging player either way.
Topics
Uncategorized