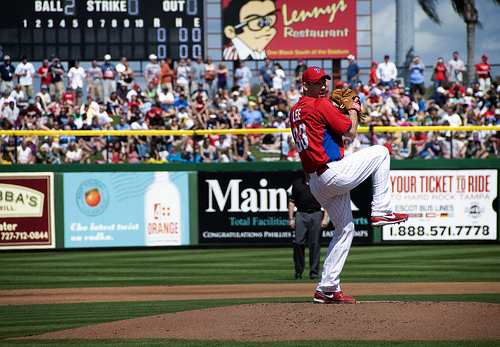 With only 9 days until Opening Day, the Phillies should be kicking it into gear to get ready for the regular season. They need to turn on their bats and start scoring runs to back up their pitchers. This afternoon, Cliff Lee (1-2, 3.45 ERA) will get his fifth start of Grapefruit League ball as he takes on the Pirates for the second time this Spring.

In Lee's last start, on Thursday, he took the tough loss after throwing six strong innings of one run ball. Lee totaled seven strike outs and allowed just five hits against the Blue Jays. The offense didn't back up Lee's efforts in the 2-0 loss. Cliff Lee has had a successful Spring so far. He has only allowed six earned runs, but has been handed two losses in the process. If the pitchers are going to pitch and the hitters aren't going to hit, than there's going to be a huge problem this season.

The Bucs will send out Chris Resop (1-1, 3.00 ERA), who will be making his first start of the Spring. Resop has made six relief appearances in Grapefruit League games, but the Pirates may be testing out his arm to see if he can be part of their equation for the starting rotation. Resop has only allowed two earned runs in six innings of work and has a win and a loss to his credit.

While Spring Training is winding down, teams are making cuts and once 40-man roster is becoming closer to a 25-man roster. This morning, the Phillies made three cuts in their pitching staff. Scott Elarton(0-1, 5.02 ERA), Jake Diekman (0-0, 0.00 ERA), and Brian Sanches (0-0, 6.43 ERA) were all sent down to minor-league camps. With Diekman down in the minors, it now leaves only Joe Savery and Raul Valdes as the only lefties, besides Antonio Bastardo left in camp.

You can watch today's game on TV on TCN and MLBNetwork.