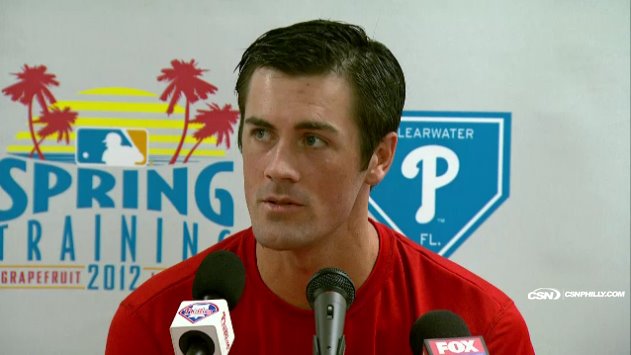 Lefthanded pitcher Cole Hamels and the Phillies are talking about a new contract, and talks are beginning to heat up.

According to CSN’s Jim Salisbury, Hamels’ representative, John Boggs is spending the week in Clearwater. He has already spoken to Phillies’ GM Ruben Amaro Jr. and plans to before he heads back to San Diego.

Hamels, 28, will become a free agent at the end of the season unless he and the Phillies can come to an agreement. Hamels previously stated that he will not be focusing on any kind of contract this season and will only focus on the game. Now, we all know that may not be true. Hamels is definitely going to want to know how much money and for how long he will get it for.

“Basically, we’re talking,” Boggs told CSNPhilly.com. “It’s a process. We’ve had a conversation [this week] and we’ll continue the dialogue. Ruben and I have a very good relationship.”

Citing privacy, Boggs was reluctant to give a status report on the negotiations. Asked if he believed the two sides were making progress, he smiled and said, “I’m an optimist. I’m always optimistic.”

Boggs was asked if he believed a deal could be reached before he left Florida at the end of the week.

“I don’t see that happening,” he said. “But I really don’t want to handicap it. We can continue talking by telephone after I leave.”

It’s not unusual for a player in the final year of his contract to set opening day as a negotiating deadline. Boggs indicated that he would not do that.

“Deadlines create a frenzy,” he said. “We’re always willing to listen. The goal of the negotiation is to not disrupt Cole’s preparation for the season and his focus on winning. We want to keep the business side separate.”

Hamels expressed his desire to stay in Philly during his first press conference in the beginning of Spring, but has noted that he is aware of the popular demand he is putting out as one of the most elite lefthanded pitchers in the game. Hamels avoided arbitration this winter when he signed a one-year, $15MM contract with the Phillies. Hamels posted a 14-9 record along with a 2.79 ERA last season, one of his best yet.

If any deal does get done before the regular season starts, it will be a great relief for fans, and the Phillies. Expect a long-term deal worth well over $100MM.