Cole Hamels To Start Against Bucs 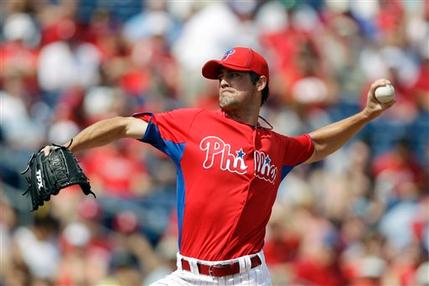 Yesterday's game is a thing of the past, so forget about it. Today, the Phillies will host the Pittsburgh Pirates and they will send out lefty Cole Hamels (0-0, 4.50 ERA) against the Bucs. Hamels pitched two innings last Saturday against the New York Yankees. Allowing just one run on three hits, Hamels added a strikeout to his line. Hamels received no decision, but the Phillies ended up losing to the Yankees, 8-5.

The Pirates are 2-3 on the year, as are the Phillies. This afternoon, they will send out righthander James McDonald (0-1, 9.00 ERA) against the Phillies. In his last start, a two inning outing against the Toronto Blue Jays, McDonald allowed two earned runs on two hits and a walk. McDonald complemented his line with a strikeout. McDonald was handed the loss in the 7-2 defeat.

The Phillies were only able to attain five total hits over the course of yesterday's game. Only one of those hits came from a major league starter (Shane Victorino).

Today, Charlie Manuel will send out this lineup: