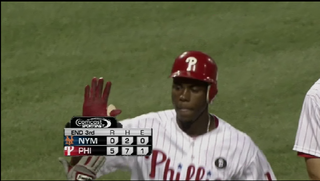 Well, i'm glad I waited until the morning to write this one.

First off, the Phillies played two yesterday. In one game, they beat the Braves 6-4 in Clearwater. In the other game, they tied the Rays 6-6 in Port Charlotte.

Now the news. Though he got the win yesterday, Dontrelle Willis got released today. Willis was 1-1, with a 16.88 ERA after yesterday, when he walked another batter. There are now 37 spots on the 40 man filled, and there is a clear path for the other lefties- Diekman, Savery, and Valdes.

Today's line-up is out, and Dom Brown is missing today's game with a sore neck again. Not a lot of regulars are heading down to Bradenton, but Jim Thome is playing first in minor league camp. For what it's worth, Frandsen is playing second and Galvis short today.

Ok, so now, the projections-

Ok, so the real changes are Diekman on, and Podsednik being the first guy off. Brown drops, Podsednik moves up, because Brown's missing time for the second time this spring, and Podsednik continues to play well. I think Lou Montanez is in the running for that outfield spot too. Savery, Diekman, and Valdes are now competing for the second lefty spot, if the Phillies carry one. Willis being gone really opens up that bullpen.
I've made some Utley/Contreras decisions too. If neither appears by the 22nd (the day after their one off day), they will both be projected to the DL. Until then, I'll leave them on the team.
Topics
Uncategorized