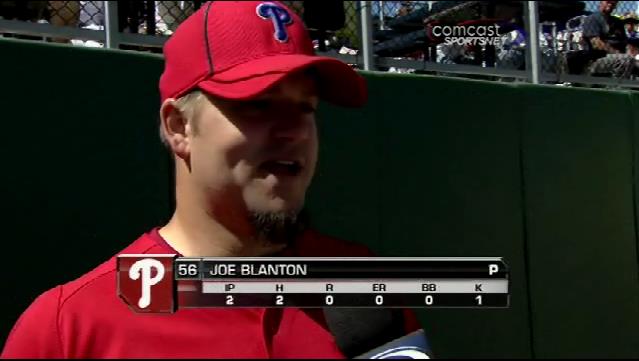 The Phillies handed the Detroit Tigers their first loss yesterday in their 7-5 victory. Roy Halladay threw three innings and allowed three earned runs on four hits. Doc also struck out four, but his ERA remains high at 7.20 for the Spring. The Phillies rallied late in the sixth and seventh innings to score seven runs to take the lead on the Tigers. Jeremy Horst earned the Win after his inning and two thirds of scoreless ball in the sixth and seventh.

Today, Joe Blanton (0-0, 0.00 ERA) will get the start, his second of the Spring. In his first appearance on Monday against the Yankees, Blanton threw two scoreless innings allowing just two hits and a strike out. A spot in the rotation won't come easy, Blanton knows he has to work hard and show that he is still a quality starter.

The Orioles will send out lefty Brian Matusz (0-1, 13.50 ERA) against the Phillies today. Matusz had a rough start to Spring on Monday when he allowed three earned runs on six hits in two innings of work against the Pirates.

The Phillies' lineup will consist of mostly the Opening Day starting lineup. Charlie will send out this lineup today: