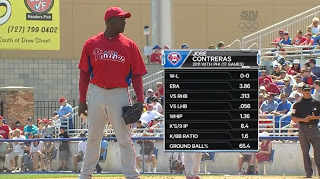 Well, Sunday was eventful in Phillies camp, so there's movement all around.

The biggest news was in the bullpen, where Jose Contreras made his return. While he wasn't effective, that's not the point. He was back, he pitched, and he's healthy.

Laynce Nix played some minor league ball Sunday, as did Jim Thome, and both did fine. Neither wouldn't make the team, but both helped their cause to play.

The game on Sunday was ugly. Cole Hamels got roughed up. Chad Qualls was pretty good, as was Bastardo. Herndon was fair, and probably didn't hurt his cause. Contreras wasn't good, but it was his first real action. The offense had a lot of hits, but not many runs. Lou Montanez had a three hit day, and Shane had a two hit day. Podsednik had a hit again, and is now at .371. Pierre had a hit, and is at .267 now. Montanez had a double. Shane a triple, and a stolen base. Pence and Mini-Mart had RBI's. The box score is here.

I'll do the Iron Pigs separately, but here's my current take on the roster.

Ok, the only change on the roster is Martinez over Galvis- in part because Martinez has been up, in part because of his numbers this spring, in part because he's healthy again, and in part because he's played Second, Short, and Third. This could all be moot too- if Utley isn't ready for Opening Day, or worse yet, if Polanco isn't either. I'm certainly now prepared for Utley to miss, he hasn't taken a swing yet this spring, but I'm not prepared for both. In that case, Galvis is on this team, as is Martinez, and at least one starts (Wigginton plays the other), and Thome is playing a lot more first.
The real movement is on who's close. The closest battle of the spring is Podsednik, playing out of his mind, and Pierre, who I think we mostly think has more in the tank. Podsednik was hurt a lot last year, and probably hurt his cause that way with the Phillies, but his spring is impressive, He's hitting, scoring, stealing bags, and playing good defense. Pierre's not doing bad though, so this one is close. Galvis is dropped down to last five off, but I think he's more of an injury case right now. Savery, Diekman, and Raul Valdes is really close for that last bullpen spot, assuming the Phillies carry seven. I'm pulling for Savery, who I think is more ready, but Diekman impressed Dubee early, so I'm betting on him. Dom Brown has to get back on the field ASAP, or he'll be in AAA to start the year. Montanez is playing insanely well, so I'm putting him on here now, because he's putting on a run for consideration. I have to also consider Scott Elarton and David Herndon, who I dropped from yesterday's list because of Contreras now being back and healthy. Elarton starts today, which is critical for him. Right now I see the Phillies trying to convince him to take a minor league deal to pitch in Allentown.
Topics
Uncategorized