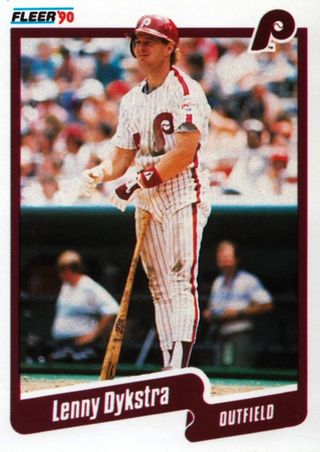 Well, Lenny Dykstra's legal woes appear to have reached their climax, as the broke former Phillies OF was sentenced to three years in jail today.

The charge relates to a grand theft auto charge:

Prosecutors said Dykstra and two co-defendants tried to lease and then sell high-end cars from     several car dealerships by claiming credit through a phony business.

The piece notes Dykstra's lawyer was charged with identity theft.

The Huffington Post piece notes that Dykstra has been living in a "sober living facility".  Previous reports showed Dykstra living in his car.   Reports stated that Dykstra was found with cocaine and synthetic human growth hormone when arrested.

Dykstra first pleaded "no-contest" (a.k.a. "I won't fight the charges, essentially a guilty plea) for fewer charges.  Then, last week, he tried to throw them out.

Dykstra also faces some indency charges for exposing himself to people he met on Craigslist.