Phillies Break Out With Hit Fest To Beat Red Sox, 10-5 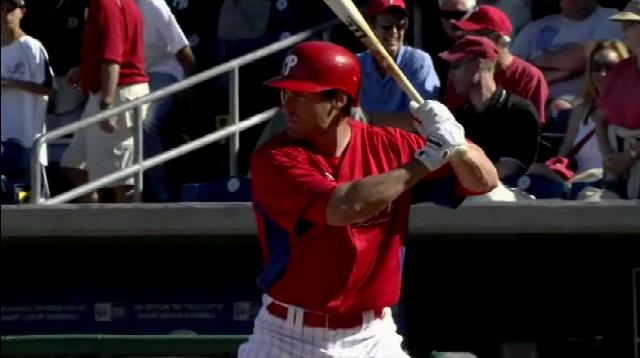 The Phillies visited the Red Sox this afternoon at JetBlue Park, or Fenway South as it should have been named. This game was a wild one for the Phils, we witnessed the offense break out in an absolute hit fest.

The first two runs came in the first inning; Shane Victorino scored on a wild pitch, and John Mayberry Jr. hit an RBI single. It would get much, much worse for Red Sox starter Alfredo Aceves from there.

Freddy Galvis and Pete Orr kicked off the top of the second inning with back to back solo home runs. With Shane Victorino in scoring position again, Hunter Pence doubled him in. Pence scored later in the inning on an RBI single from Laynce Nix.

In the bottom of the inning, Jacoby Ellsbury tripled against Cole Hamels to score Kelly Shoppach and Josh Kroeger.

In the third, Carlos Ruiz hit his second homer of the spring, a solo shot to left field. Miguel Abreu later scored in the inning thanks to a single from Victorino. Shane scored on an RBI single from Juan Pierre.

Laynce Nix scored in the fourth inning on a single from Pete Orr. Solid day for the Canadian.

Cole Hamels was taken out after four innings. He allowed two earned runs on four hits, walking two and striking out three. Chad Qualls pitched a scoreless fifth after Hamels, and Raul Valdes allowed a single run to score on a Josh Kroeger single in the sixth.

Two more runs scored for the Sox in the eighth inning with Brian Sanches on the mound. The bases were loaded for Peter Hissey who singled to score two.

Jake Diekman pitched a scoreless bottom of the ninth, ending this game for the Phils. Tomorrow afternoon, Dontrelle Willis and the Orioles will pay visit to Clearwater to face the Phillies.