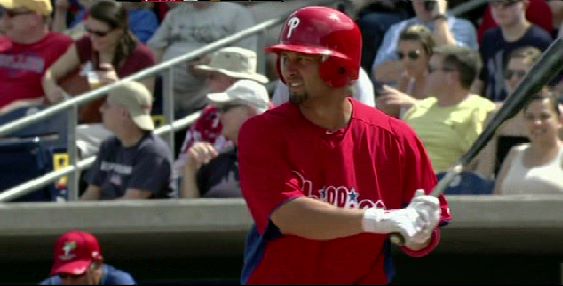 The 2-10 Braves came to town this afternoon to face starter Joe Blanton and the Phils. In Port Charlotte, the Phillies split squad team played against the Rays.

In Clearwater, Jim Thome got the ball rolling in the first inning with an RBI single to left field. Left fielder Matt Diaz seeked revenge for his team and hit a solo home run in the top of the second inning. Jimmy Rollins came right back in the same inning and scored Freddy Galvis on a line drive to center field.

To continue this game of cat and mouse, Michael Bourn singled in the next inning to score Tyler Pastornicky. Chipper Jones gave his team the 3-2 lead with an RBI groundout. In the bottom of the same inning, John Mayberry Jr. singled to score Shane Victorino, tying the game.

Placido Polanco contributed to the hitting party in the fourth inning with an RBI single. After the Phillies had taken a one run lead, Dan Uggla tied it up in the sixth with a solo home run off of David Herndon.

Chad Qualls closed it out in the ninth inning, allowing one baserunner, but pitching a scoreless inning. Phils win, 6-4.

Meanwhile in Port Charlotte, Joel Pineiro started the ballgame for the Phils and received some help early on from the offense.

In the top of the first, Ty Wigginton doubled to score Juan Pierre, putting up the first run of the game. Sam Fuld scored in the same inning for the Rays off of a single from Matt Joyce.

Juan Pierre scored two on a single in the third inning, giving the Phils a 3-1 lead. He later scored on a wild pitch, adding another run on the board.

Scott Elarton replaced David Purcey on the mound in the fifth inning and ran into quite a bit of trouble. After giving up a double, a single, and a walk, Reid Brignac brought a run home with a single. With the bases loaded, Jose Molina hit a sacrifice bunt, scoring Carlos Pena and tying the game.

In the eighth inning, Pete Orr doubled to score Steve Susdorf, taking the lead. Hector Luna scored in the same inning on an RBI groundout from Tuffy Gosewisch.

Michael Schwimer allowed a run to score in the bottom of the eighth, Jose Lobaton singled to score Omar Luna.

In the next inning, Jesus Feliciano doubled to score Tim Beckham, tying the game at six. That's how the game would end in Port Charlotte.

Tomorrow, the Phillies will head over to Bradenton to play some afternoon baseball with the Pirates at 1:05.