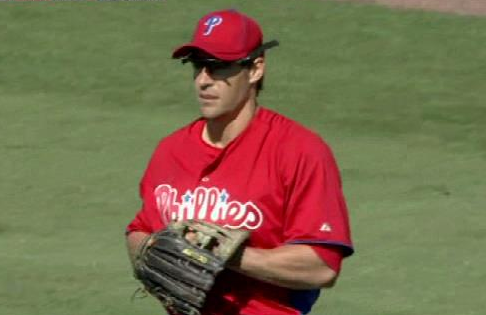 In one of the quickest games of spring training thus far, the Phillies dropped a game to the Pittsburgh Pirates in Bradenton. Cliff Lee started this afternoon's game, and was clearly affected by the release of Dontrelle Willis (kidding), because he gave up a solo home run to Starling Marte to start off the ballgame.

Marte scored another run for the Pirates in the third inning courtesy of an RBI groundout from Casey McGehee. In the fifth inning with Cliff Lee still in, Jake Fox hit a solo homer, putting the Bucs up 3-0.

The Phillies attempted a comeback in the ninth, first with a sac fly from Kevin Frandsen with the bases loaded, and an RBI single from Migel Abreu.

That's your ballgame, Phillies lose 3-2. Tomorrow, the Blue Jays will come to town to play some St. Patty's Day baseball at 1:05.

In other news, Dontrelle Willis could possibly be headed to the Rockies soon. Troy Renck of the Denver Post reported that Rockies GM Dan O'Dowd will take a look at Willis, and the Rockies are in need of bullpen depth. Should the Rockies sign Willis, it will be on a minor league deal.