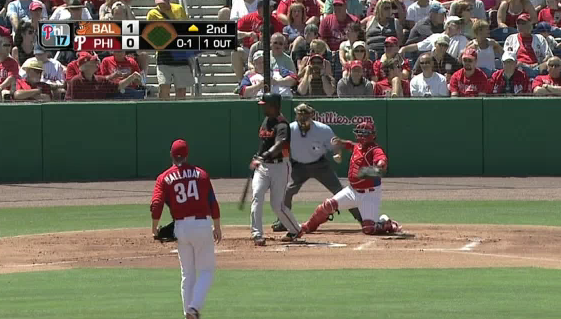 The Phillies sent Roy Halladay out against the Orioles. He started off strong, but got hit in the second for two runs, one on a solo shot by Nolan Reimold.

The Phillies would come right back in the third. Placido Polanco got the Phillies on the board with an RBI single. Jim Thome followed by crushing a ball to centerfield that dropped in for a two-run double.

Halladay cruised from there, going 6 1/3 innings, allowing seven hits, two runs, two walks and striking out nine. Antonio Bastardo finished the seventh for Halladay, stranding runners at first and third with one out by getting two strikeouts.

Jose Contreras came on to pitch the eighth and allowed a two-out, game-tying double to Trent Mummey. Contreras added two strikeouts to his day.

Jonathan Papelbon pitched the ninth and allowed one hit, but gave the Phillies a chance in the bottom of the ninth. The Phillies would get two baserunners in the ninth, but stranded them both to force a 10th inning.

Juan Morillo came on for the 10th and pitched a scoreless inning, giving the Phillies one last chance at a win.

The Phillies, however, could not manage anything in the bottom of the 10th, and the game ended in a 3-3 tie.

In their game against the Tigers in Lakeland, Scott Elarton got the start for the Phillies. The Phillies got the scoring started early.

In the first, Hunter Pence hit an RBI single to get the Phillies on the board. Ty Wigginton would follow by doubling home Pence to cap a two-run first.

From there, the Phillies couldn't add to their lead, while the Tigers chipped away. Prince Fielder got a run for the Tigers with a sac fly in the first.

Elarton would allow just one run on two hits in his four innings of work, but did walk four with no strikeouts. David Herndon was one out away from ending his outing scoreless, when Don Kelly tripled home the game-tying run.

In the seventh, a single and a walk for the Tigers set up a scoring chance. Tyler Collins then took Joe Savery deep for a three-run shot, giving the Tigers the lead.

James McCann would add a solo shot in the eighth, and the Phillies would get a solo shot from Cody Overbeck in the ninth, but they fell to the Tigers, 6-3.

In the Orioles game, several Phillies contributed with the bats. Freddy Galvis and Carlos Ruiz had the best days, with Galvis getting three hits and Ruiz getting two. Meanwhile, Placido Polanco and Jim Thome added RBI hits.

On the mound, Roy Halladay was excellent. Despite having a shaky second inning, Halladay had his strikeout pitches working, and after the seventh appeared to have the pieces in place for a regular end to the ballgame. When Bastardo struck out both batters he faced, it seemed the Phillies were working on a back-end of the pen that would work perfectly in the season. Contreras did allow the tying run, but Papelbon continued to pitch well.

In the Tigers game, it was nice to see some of the Phillies regulars pick up hits. Juan Pierre and Shane Victorino each had two hits, and Hunter Pence and Ty Wigginton each drove in runs.

On the mound, Scott Elarton continues to make a strong bid for a bullpen spot, while others just got some necessary work in. Still, I think it's safe to say that guys like David Herndon and Joe Savery will be starting the season in the minors.

The Phillies are back in action tomorrow when they face the Boston Red Sox.