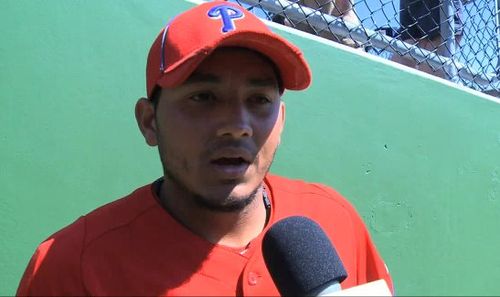 Phillies' General Manager Ruben Amaro, Jr. has no reason to reveal his personnel plans and valuations to the media. It would be quite disadvantageous for the Phillies' organization if opposing franchises had such knowledge at their disposal. Amaro's best course of action is to mix truth and fiction, when divulging information publicly. Earlier this offseason, when the claim that the Phillies do not utilize sabermetric statistics was made, that appeared more likely fiction, than truth.

The much more recent announcement that the Phillies are content to enter the 2012 regular season with 22-year-old shortstop Freddy Galvis as their starting second baseman, appears likely to be another work of fiction. Galvis is definitely a promising prospect, but he is very far from a finished product. Talk of Galvis starting the season in the Phillies' lineup seems more an attempt by Amaro to retain leverage in trade negotiations, than a logical course of action.

In 2011, Galvis had 126 plate appearances in AAA, for the Lehigh Valley IronPigs. Only seven of his hits (six doubles, one triple) were for extra bases. His batting average of .298 looks excellent, but it was considerably inflated by an unsustainable .350 BABIP. Looking at the rest of his statline:

Perhaps even more disturbing is a 2.4 BB%, which indicates that Galvis is sorely lacking in patience, a requisite trait for a singles-only hitter. If Galvis could produce that statline at the MLB level, his strong defense would make him an adequate stopgap measure. But, adjusting for the difference between AAA and MLB, and regressing his BABIP a sustainable level, show a player just not ready to hit at the MLB level. The RotoChamp projection of .270 OBP, .305 SLG, and .257 wOBA is truly frightening. Giving a substantial number of plate appearances to a bat of that quality would be very damaging to the Phillies' offense.

Besides the anemic bat, there are other reasons to keep Galvis in AAA, at least for the time being. A failed stint in MLB could harm Galvis' confidence, and devalue him as a potential trade piece. Playing him a full season at the AAA level should be beneficial to Galvis' continued development with the bat, while also delaying the start of his personal arbitration clock. The best currently-rostered 2B option is Ty Wigginton, who, while well below average with the glove, projects to a wOBA in the .315-range, substantially better than Galvis' .257 projected wOBA. Hopefully, Amaro is truly looking into alternatives, because it's difficult to see how entering the season with Galvis as the starting 2B is a good idea.