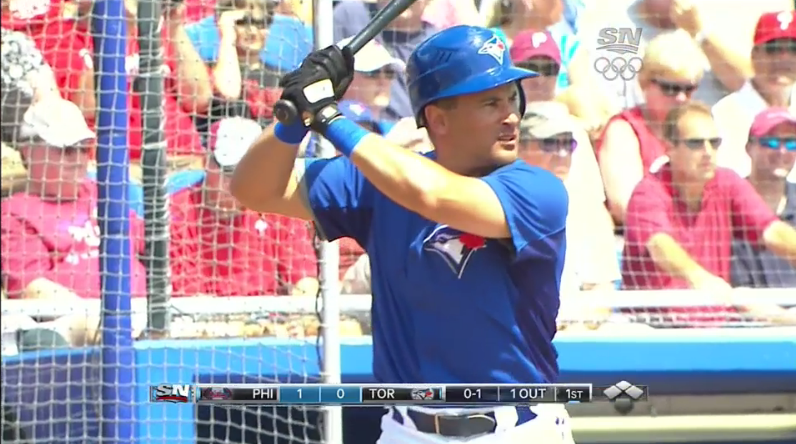 So, Michael Martinez is injured.  If Chase Utley being injured was not big enough, losing the Phillies' infield utility man does not help matters.

If you remember back to the Phillies' offseason, the Phillies reportedly were interested in future Hall of Famer Omar Vizquel. At the time, such a trade did not appear to make much sense, as the Phillies had both Michael Martinez and Wilson Valdez.  Ultimately, Vizquel signed a minor-league deal with the Toronto Blue Jays with an invitation to Spring Training.   His deal is not guaranteed.

After the trade of Valdez that caused Phillies fans to freak out for no reason, and the injury to Michael Martinez, the Phillies are in need of an infielder.   Could it be time to reconsider Omar Vizquel?

A non-roster invitee, the Blue Jays have other infield options, most notably Kelly Johnson and Brett Lawrie.  Former Phillie Brian Bocock is there, too… (just kidding).   But Vizquel is not essential to the Blue Jays' plans and probably could be had for the right price.

What is the right price for a 44 year-old past his prime?  Probably not a lot.

Vizquel has spent time this Spring at third base, shortstop, and second base.  I previously wrote that Freddy Galvis presumably took #13 in honor of his fellow Venezuelan shortstop legend, and I'm sure Vizquel's mentor presence would only make Galvis better, since the rookie may be counted on to man second base on a daily basis.

With Ty Wigginton backing up Placido Polanco at third base, John Mayberry Jr. at first base, and Jimmy Rollins at Short, Vizquel would be one extra option to help ease Galvis into the second base role.

Worried about a 44 year-old's bat?  Vizquel is hitting .400 this Spring.  Granted, it's just 20 at-bats and a small sample size, but there is certainly nothing about his performance to alarm anyone.

Don't forget, Charlie Manuel managed Vizquel with the Indians, and he was a teammate to Jim Thome.  Seems like a good idea all around.