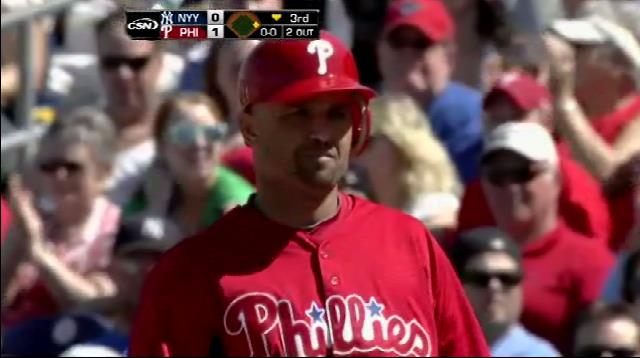 The Phillies and Yankees made their way back over the causeway to play their third spring training game this afternoon in sunny Clearwater. Placido Polanco and Joe Blanton saw their first starts of the spring, as did a few of the Phillies' bullpen contenders.

In Joe Blanton's first start of the spring, he pitched two innings allowing just two hits and striking out one. The first run of the game came in the third inning courtesy of Placido Polanco who brought Jimmy Rollins home with a single.

In the top of the fifth with Austin Hyatt on the mound, Jayson Nix popped up a sacrifice fly to score Russell Martin and tie the ballgame. The Yanks took the lead in the next inning when Brett Gardener tripled and scored on a throwing error by Kevin Frandsen.

Adam Miller, a non-roster invitee of the Yankees walked three straight batters to start the sixth inning; Hunter Pence, Ty Wigginton, and Dom Brown. Erik Kratz scored Pence on a single to right field, tying the game at two a piece. After Kevin Frandsen was hit by a pitch, bringing home Wigginton, Miller was removed. The battle continued with Freddy Galvis who popped up a sacrifice fly to score Brown. Tyson Gillies walked to load the bases, and Hector "Big Tuna" Luna cleared them with a double.

Right handed non-roster invitee Brian Sanches loaded the bases in the seventh inning and allowed one run to score on a Zoilo Almonte single. In the next inning, Michael Martinez came back with a two-run home run which put the Phils up 9-3.

David Herndon closed it out securing the 6-run lead and 9-3 win. The Phils are now 2-1 this spring.

Next game will be tomorrow in Dunedin against the Blue Jays at 1:05.