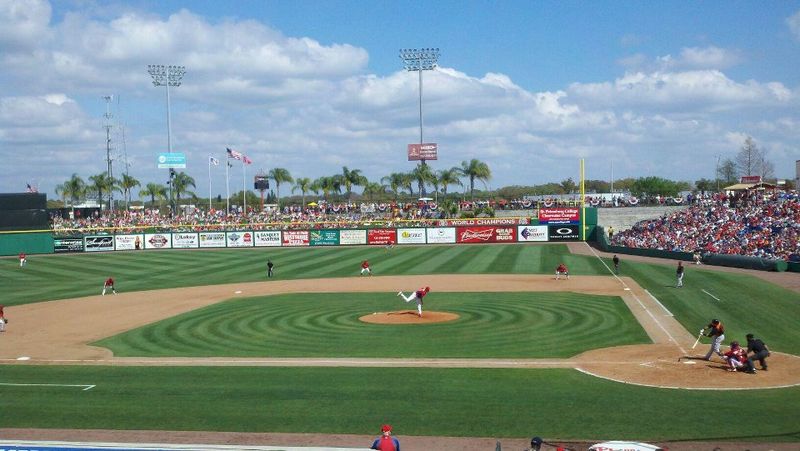 Starting today, I will do a daily update on the Phillies roster, and what I think it looks like. So, here we go.

In my view, the top decision facing Ruben and Charlie is what to do with Domonic Brown. We all knew it would be in the end, right? The dude's insanely talented, and drives us nuts. He's 5-for-16 this spring, and is basically hitting for power (three extra-base hits). Now, I do not believe the Phillies want to keep him on the big league roster for Opening Day, and I think Ruben does believe he needs more AAA time. I'll just say that I disagree. I think his offense is too important to this team particularly with Howard out for a while, and Utley yet to take a swing. I also think if he's in left, and Mayberry's at first, you have the best possible offensive line-up with Howard out. I look at the bench then, and see Thome, Schneider, Nix, Wigginton, and one more open spot, which is a stronger bench than if Mayberry and Wigginton or Nix is in the line-up.

All of this leads to issue #2, the infield. Apparently, the Phillies are looking for more infield depth. This is the first time I've genuinely been concerned about Utley. Now, I'm not in a panic, since prior to now I thought he was in better shape than last year, but I'm concerned. I also see another angle on this. Howard's out, I'll bet until June, and Utley and Polanco have had major recent injuries recently. Jimmy Rollins has had some leg issues in recent years too. Ty Wigginton, initially viewed as a first baseman, also is the primary back-up for Polanco and Utley, but he's not a shortstop, so who's going to back up at short? If you keep Brown for his bat, you probably should keep a Pierre or Podsednik to replace him in late innings, which would fill up this bench, so getting versatility here isn't a bad thing (since you have one spot, and not two, to play with). I am increasingly convinced the Phillies may carry a six man bench, and it seems they may not trust Michael Martinez to be the utility man (man, that Valdez trade looks stupid). I'd like to think they should keep Freddy Galvis (he gives them the most versatility), but I don't think they will, as they'll say he needs 450 at-bats this season, which is fair.

Now all of this finally leads to pitching. The rotation has no changes to be made right now, which is good because that's our strength. While the rotation sees no change, the end of the bullpen does. I see Papelbon, Bastardo, Qualls, Kendrick, and Stutes as sure things, I'm no longer sure about Contreras or Willis. I think Jose's progressing, but in order to keep a sixth guy on the bench, he may spend a week or two behind in the end. I also think Willis' poor performance and elbow soreness puts him at risk now. I think this week is really important to both. Ultimately, if both are healthy, the Phillies are in a spot to figure out how to balance out that bench.

So, in short, if I were the GM, Dom Brown and Freddy Galvis would be getting every shot to make this team right now.  I'll also count Contreras, Willis, and Utley as all being ready for Opening Day, since we have no word otherwise. With that said, here's where I think the roster is.

I'm hoping to see all five of those guys go to Lehigh Valley if this is right. As stated above, I'd keep Brown and figure out how to make it work- but that's just me. I think this team needs dynamic offensive players, and frankly, that's what he's supposed to be. I see signs he's ready to be that.
The Phillies will play the Twins today. Tomorrow it's the Braves and Rays in split-squad games. Hopefully more of this will shake out. Halladay, Papelbon, and Stutes will pitch, and Willis is listed, but doubtful.
Topics
Uncategorized