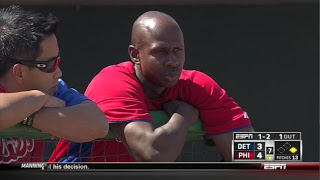 Leave it to me, I said yesterday was Sunday. Oops!

Well, the news of the day was a lack of news. There was a game, and they had all of three hits, and lost 6-0 to Boston. Galvis had a double and Montanez and Orr added singles, and well, that was it. Blanton was weak, and the only other big leaguer to throw was Qualls. Pretty much, they were lame.

The real fireworks in camp were Ruben Amaro being annoyed that he and Chase Utley are being accused of being secretive on Chase's knee injuries. I'm sympathetic to the team, in that why would you describe the injury status of your stars? Come on there. With that said, Ruben said a week before Chase left camp that he'd be playing to start the year, and so did Chase. Chase and the team said he was fine in 2008 as he slumped through the heart of the season, and in fact he had hip surgery right after the season. Chase wants to play through everything, and if he can, great. Frankly, at this point, I don't even want a timeline. I just want him to come back and not go on the DL three more times this year.

Ok, with that out of the way….. here's my roster prediction:

Ok, so basically, no real changes. As a note here, I list the starting rotation in depth chart, not game pitched order. I do know that Hamels will throw the fourth game, but anyone want to argue he's a top three starter here?
I think we're at the point in the spring where I most "wish list" here. We know who's in the running now, and not much will change drastically in predicting this team. If I had a "wish list" today, it would be to find another middle infielding BACK-UP option that is right-handed, and preferably better than Orr (no to Ramiro Pena). Secondly, maybe a better righty last reliever than Herndon, but he's probably gone once Contreras is really back. I don't see Contreras coming north with the team, since he hasn't had a clean outing yet. So mostly, I want to see us look for a back-up infielder who's an upgrade on Martinez or Orr.
Topics
Uncategorized